North, East and all over again, part I

Wow, so it's been a very long time since my last post. To say the least I've been busy, my apologies to the few people who check daily for changes (mom?). I took classes through the summer and they finally wrapped up a couple of weeks ago. Since that point I have been desperately trying to play catch up with the to-do list at home, and the other list sitting in front of my home office desk. Needless to say some things have gotten checked off and some things haven't, the fall semester started on Wednesday, while things are still a little slow I decided to get some posts out.

Two weeks ago Monday (that's right 10th August 2009) I started off driving north out of Lawton, stopping at Tom Steed Reservoir before heading to the Selman Ranch. Birds were a little slow but I did pick up a few, including but not limited to, a Ladder-backed Woodpecker, ten Upland Sandpipers, and a number of common shorebirds. I actually fared better with dragonflies/damselflies, I managed to get 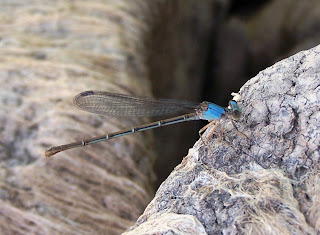 photos of what seemed to be a Powdered Dancer (above, female, comments on identification are welcome) emergence, or perhaps not so long after one. There were literally hundreds (<250) all moving about and testing my patience as a photographer.

I made it to the Selman Ranch that evening, and the next morning I watched the sunrise on the Buffalo Creek Salt Flats. Sue Selman and I watched the adult and young Least Tern pitch and dive for the little morsels of minnows that were still pooled up along the stream bed. After a few looks at Snowy Plovers, Black Tern, and both Greater and Lesser Yellolegs we moved on. Stopping here and there along the way back to Selman Ranch Headquarters we managed a few more common bird species and had a spectacular time chasing bugs around, some of which are shown below. This Variable Dancer (above), represents a new record for the county...(pending that is), a very attractive little guy.
The same can be said about this Blue-Ringed Dancer (also pending).

Ok, I figured why not throw this Sachem Skipper in for kicks, the photo just turned out so nicely.

I still have a number of photos to identify so that dragon/damselfly county record count may continue to rise. After a nice visit with Sue I moved on west to Laverne, but not before stopping at my favorite pond in Harper County, which followed a visit to Doby Springs. The springs produced a Great-crested Flycatcher, multiple Blue Grosbeaks, female and young Orchard Orioles, as well as a smattering of other more common species (BGGN, NOCA, ect..). The odonates weren't all that bad either. In the shaded spots were loads of Ebony Jewelwings (25 or so now that I think about it), and as I picked through them and others I was able to locate a Great Spreadwing (pending county record). I mean this guy was really neat looking, at least a quarter size or more larger than the Ebony Jewelwings, and a little more difficult to spot, a more cryptic color pattern and clear wings. 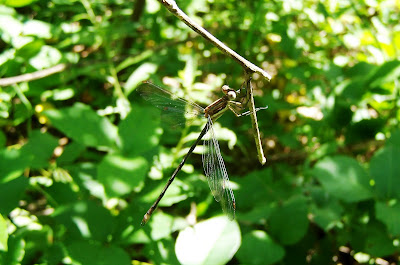 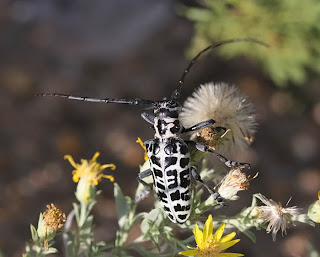 There were also plenty of butterflies and other bugs as well.

Cottonwood Burrowers were flying about. Jim Arterburn sent me this wonderful photo that he took at the Salt Plains on the 14th of August. Great shot Jim and thanks!Can you believe I had some wonderful photos of two burrowers myself and managed to accidentally delete them all, all that is except for a few that I manged to crop and save right away when I got to laverne...........argggg, very frustrating indeed!).These guys would be pretty intimidating creatures if you didn't know any better.

After Doby Springs it was on to my favorite pond (Marty and George know the one). Just like always (or at least it seems that way) a great bird was awaiting me. It took some patience and a little good luck, but the molting adult Sanderling (owing that correction to Michael Patten, I thought it was a juvenile but you can definitely still see a tiny tinge of "rufous" under the birds chin) was a welcome return to the bird world. 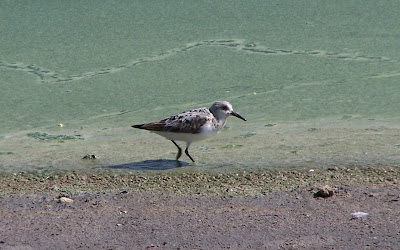 It made me work though (probably because it was a state bird for me), constantly flushing and flying across the pond. I'd get my scope out and everything set-up for a digi-scope photo and then a truck would come by and off the bird would go, again. Just before I was ready to leave and after having spent entirely too much time working for a documentation photo, I noticed two birds flying straight at the truck from across the pond. Wouldn't you know it one of them was the Sanderling, the other a Semi-palmated Sandpiper. I couldn't believe it. I took photos, some from only 20 feet or so and then headed for Laverne and a quick gas up and visit to Oklahoma Lesser Prairie Chicken Headquarters. About twenty minutes later I stopped at Fort Supply, I scanned the lake and nothing. Soon after I headed east.

This seems like just the place to stop....stay tuned for part two of the story..Henslow's Sparrows and the Tallgrass Prairie Preserve.
Posted by Eric Beck at 9:46 PM

I've seen that sunrise on Buffalo Creek at the Selman Ranch - it doesn't get any better. I didn't know there was an LPC Headquarters. I'm signing up for the second year.