A little bit from NW Oklahoma...again 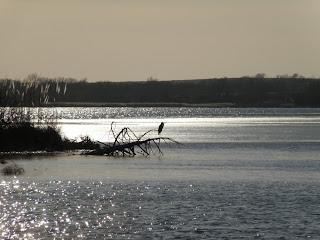 Another couple of days in NW Oklahoma. Blue skies and beautiful scenery, I couldn't have asked for anything more. I just have to say, at some point I made a right turn in deciding to pursue birds for my life's work, I couldn't imagine a better job!
In between scouting for new fence marking and removal oppurtunities, future volunteer work weekends anyone, I did happen upon a few goodies. The best surprise of the weekend was locating eight Lesser Prairie Chickens at the Selman Ranch. What's new you ask? Well, they were all down in a valley, most likely seeking shelter from the cold north winds that could be found on the bluff and hill tops. I've been visiting the ranch for around three years now and this was the first time I have seen this many birds that were not on a lek, exciting for me, no pictures though.
I had a chance to visit Fort Supply and the Cooper Wildlife Management Area as well. The lake wasn't exactly pulsing with life, but there were some birds to be found. There were two adult Bald Eagles along the eastern shore. I suppose they were male and female, although I never got close enough to find out if there was a difference in size between the two. I suspect in the upcoming weeks I should start looking for some nest building activity. Gulls were also abundant, at least the first day I checked, unfortunately they were all Ring-billed or Herring. I guess that means I'm still on the search for a state record! 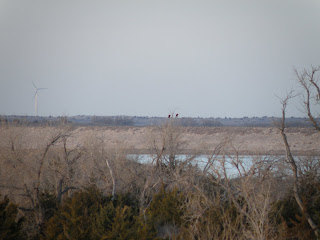 Also had a run-in with a Striped Skunk who was happy to provide me with some nice photos. Fortunately, even though it did show me the dangerous end of its body, it never did follow through...thankfully.