I spent another 4 beautiful days in northwest Oklahoma had a grand time, as usual, and got a great deal of planning and field work done for the Important Bird Areas program! I made it to the Selman Ranch IBA late Friday evening, mid-nightish, and was promptly woken by Sue at 4:30 am. Nothing like a few hours of sleep to get you fresh for the morning! Sue had mentioned to me that she was heading over to the Salt Plains NWR to take photographs and see Whooping Cranes. Having never been to the Salt Plains during this portion of the year, especially Whooper
(Whoop..whoop) season I sort of invited myself. Sue obliged, and even drove! 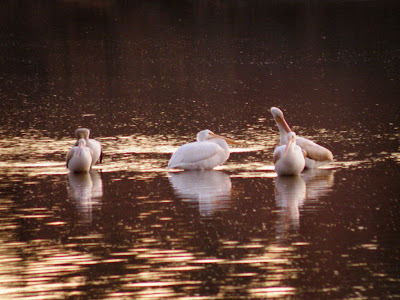 Sue spent the morning surrounded by American Avocets and Am. White Pelicans; I ran about trying to locate as many species as possible. Overall the first few hours we were there were very enjoyable. Sue got some great photos, and I managed to see a quick smattering of birds. It was nice getting back out in the field after a few stress filled weeks. A lot of the winter migrants have descended upon Oklahoma. Not all of them, but it took me back to my days on the Winter Bird Atlas. I found myself surrounded by loads of Yellow-rumped Warblers, Juncos, and of course the little brown jobs (sparrows). 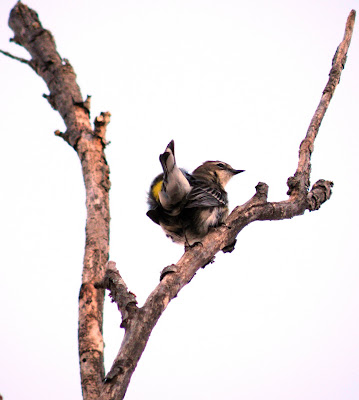 After Sue's photo session was rudely interrupted by a seemingly-less oblivious park goer, we moved away from the spillway area and over to a few other portions of the refuge. Quick note, if you are walking around at a State Park or Wildlife Management Area, or National Wildlife Refuge and you see someone with a large camera and lense patiently being still and looking very focused; do not interrupt. Wait until they move and find something else to do for a few minutes and then go ask them what they are doing and what it is or was they were looking. But if the person is obviously intently doing something, for gosh sakes be polite and wait!

The sound of Sandhill Cranes could be heard from all over the area. I was standing on the top of the spillway of the reservoir and all that you could hear were cranes. They were at least a mile off or more, their presence could be felt everywhere. As we progressed closer to the refuge headquarters and the Sand Creek Bay area, the sound got louder and louder. At Sand Creek, there were at least a few thousand Sandhills but no Whooping Cranes. We stayed and spotted the whole area with a scope but never came up with a species that was of great need to document; I made some notes. We moved on.

Next was the shorebird viewing area. There were at least 300 gulls of varying species. Most of them were Franklin's and Ring-billed, they were far enough out of reach that really picking through them for subtleties was near impossible. As we were getting ready to leave the boardwalk the flock did finally get up and move, directly overhead I might add. In typical Franklin fashion they swirled in the blue sky, no more than a hundred and fifty feet away, and then slowly, individually or by small group, the birds rolled out all headed northeast of us to a smaller more sheltered mud/sand flat. Watching the behavior of Franklin Gulls on migration is wonderful, the way they move as a flock is one of my personal favorites. Probably coming in a close second to blackbirds, in my opinion.

After stopping in Cherokee for a few minutes we made our last stop for the morning at the crystal digging area. It didn't take long before we located three large white crane at the north end of the reservoir. Pretty soon after that they took off and got mixed up with a few American White Pelicans, at which point I ended up following the wrong large white birds and lost them. Oh well! All in all, it was great few hours. Sue got some great photos, I got another look at the Salt Plains National Wildlife Refuge and more fuel for the IBA summary we are preparing for National Audubon. We traveled back to the Selman Ranch and later went out for an evening survey. One of my last for the season at the ranch. More on the weekend later.
Posted by Eric Beck at 8:34 AM

Who knows where to download XRumer 5.0 Palladium?
Help, please. All recommend this program to effectively advertise on the Internet, this is the best program!