* This blog was first published without editing. My wife and editor wants everyone to know that the copious amount of grammatical errors were not her fault, and that she has since edited.

We were without power for almost seven days. I haven't been out in the field in a couple of weeks, and I honestly haven't been doing very much birding lately; so this post is a smattering of a few things: a damage report, a little about some reading I've been doing, and finally something to think about that I noticed in Lawton, all nicely wrapped up right here! 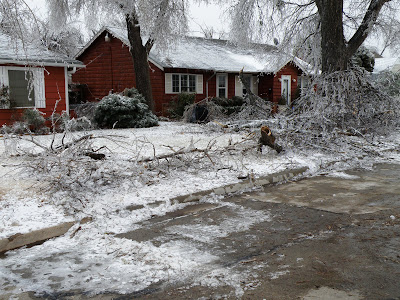 I've been spending my time cleaning up the front yards of both mine and my neighbors' houses, which are littered with, well tree litter. Just don't ask about the backyard; I'm trying to ignore it! As always I'm keeping things rolling with the Important Bird Areas program, and I should have an update finished for the project in the very near future. I will post a link here later so anyone who is interested can check it out. In between those times I've been keeping my nose buried in Wade Davis's "One River," just trying to keep the brain moving, but in a relaxing way. There's a great video on "Ted Talks" in which Dr. Davis discusses endangered cultures, if you want to get an idea of this brilliant man's efforts.

This is the second time I've picked up "One River;" it's been well over ten years since the last time so it's pretty much like reading it for the first time. To sumarize, he discusses the ethnobotanical adventures of Richard Schultes, his mentor, and then treads off on his own adventures through the depths of the Amazon. I highly recommend the book; it is truly fascinating.
There was a chapter early on that was especially interesting and got me thinking about something I saw in downtown Lawton. The chapter's title was called "Peyote Road," it was basically a story about Richard Schultes's first forray into ethnobotony and it took place right here in western Oklahoma. It obviously involved peyote and his experiences with some members of the Kiowa tribe back in the late 1920's. If you want to know more about it, read the book, because that's not where I'm going with this.
There was a short passage about General Sheridan and how he basically pushed for the genocide of the Native Americans. He is quoted as making statements like, "the only good Indians I ever saw were dead," and is known for pushing for the eradication of the Bison in order to hit the Native Americans where they could be impacted the greatest....their food and leather supplies. I immediately realised this must have been the man that the street in downtown Lawton was named for; I was later able to confirm this notion, much to my dissaproval. I mean, are you kidding? Disregarding his pre-Oklahoma Civil War affairs, naming a main street in our city after a man who actually carried these opinions about other human beings makes me a little uncomfortable; I have to remind myself that those were different times. 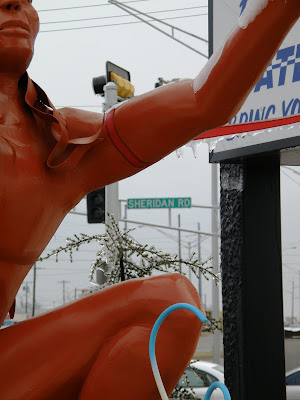 What's really fascinating to me, and also the reason I named this post "Coming Full Circle," is sitting at the corner of Cache and Sheridan. It is a statue of a Native American man! Talk about making Sheridan roll over in his grave! I don't know who the artist is, or who made the descision to put this in the corner of their parking lot, but horray for you! It looks as though there is still a little work to be done, judging by the straps that are stabililizing it, but that's not important.
To me it's a symbol of change, hopefully for the city but also for me personally. To me it's about finally realising that we are all Native Americans in a way. No matter how little or how much native blood runs through your veins, most likely it's there nonetheless. It's about realising that I have blood of people from all the corners of the world coursing through my veins, some I know about, many I don't. It's about realising that through my everyday experiences, if I can remeber that one idea, then I see the world in a full circle; it's a complete and whole world. I'm not just a man of the US, I'm a man of the world, and everyday I should live to make this world better for everyone. 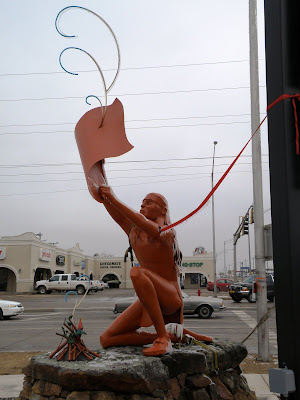 It's just something to think about. Stay tuned; I have a great new story to share about a new partner for the Oklahoma IBA program and a new chapter for me.
Posted by Eric Beck at 7:54 PM

Eric, Sheridan seemed to be a strange and complicated man. He is one of the most implicated persons in the genocide of so many native americans, yet he lived with and had a native american mistress when he was a young lietenant. He is also one of the most responsible for the establishment of Yellowstone and thus all our National Parks. Though his actions were terrible, it is difficult to find a major nineteenth century american leader who isn't somehow implicated in what happened to our native peoples, Jackson, Grant, Taylor, even Lincoln. Certainly just because they all did it, doesn't make it any less horrid. I have always thought it is by far the saddest and most horrible thing in our countries history. But as you said it was a different time, I don't know the answer but if we started taking down names for everyeone who was involved in some of these horrible war crimes, we would have a lot of things to rename.