The Selman Ranch, birding, bugging and herping...oh my! 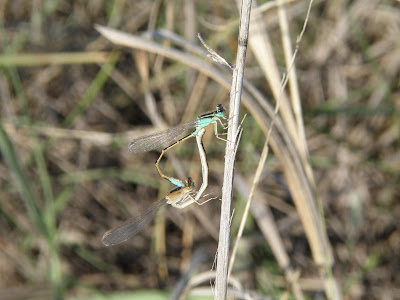 I am preparing to hit the South-east region of Oklahoma for yet another adventure with the Bachman's Sparrow. Before I set out, and after a short honey-do list I decided to put down a little something about my visit to NW Oklahoma over the weekend. I spent 3.5 days doing morning surveys, gathering fence work data (for future fence marking volunteer events) and then splitting my time trying to document the breeding species of birds on the Selman Ranch and working to beef up the county list of Odonata for Harper County, before a certain frontiersman from McCurtain County comes up and plunders the place! 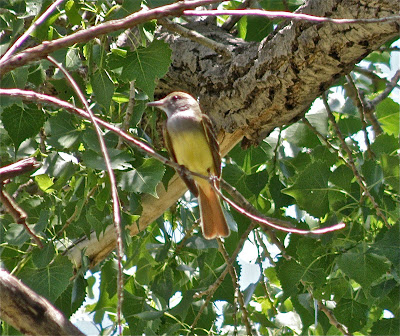 Great-crested Flycatchers are common on the ranch, their cousin the Ash-throated Flycatcher not so much, I have only located them once in the past five years.


The days are long and the summer heat has been turned on in the high plains of Oklahoma. The kind of days when you wake before the sun, put a good morning in, take a break and then wait for the cool evening to arrive before embarking on another adventure. Unless of course you like the punishment of an unforgiving no-mans land mid-day burn-athon. It depends on my attitude as to whether or not I approach something like that!
The birds were a little slow, most of the migrants have pushed through the area and now the locals are paired up and nesting. The Selman Ranch is home to numerous species that show up on the National Audubon Society's Watch List, which is exactly why it is considered an Important Bird Area. It was designated as such on the state level, and being nominated on the international level because of the presence of the Lesser Prairie Chicken (of course, and shame on you if you haven't kept up enough to know that fact!), but what people may not know is that 14,000 acres ranch boasts a fairly large population of the Northern Bobwhite. The quail were out in full force, just about every stop you made in the ranch you could hear three to four in the local area calling back and forth. Red-headed Woodpeckers and Painted Buntings, both global species of conservation concern, are also present though not in great numbers; but, common enough that you're sure to find at least one or two a day. I didn't spend much time on the Buffalo Creek Salt Flat, but if you need another example of how significant this ranch is you can spend the morning or evening looking at the local breeding populations of Least Tern and Snowy Plover (former being federally endangered, the latter a state listed threatened species). If you want to know more about visiting the Selman Ranch just visit the website by following this link.

As I ramble around on the ranch while looking for birds I tend to gather fence marking data and also manage to get distracted now and then on the occasional dragon or damselfly, okay more than just now and then admittedly. There is just so much beauty to behold while in the field I pretty much allow myself to be swallowed up whole by the experience, full immersion and really I wouldn't have it any other way. Just get blown away by it all, flowers, birds, bugs, reptiles; you name it and my curiosity gets the best of me

Sue Selman (seen laying about in the photo below, okay she was actually getting some wonderful macro photos of a very photogenic Texas Horned Lizard) and I spent one particularly fine morning in the marshes of Sleeping Bear Creek, hopeful to find some kind, any kind of marshbird. However we were unsuccessful in our hunt, but I think the both of us made up for it with taking photos of common bird species, damsels and dragons and the numerous spiders which seemed to be everywhere. We moved on through the ranch stopping at different locations for the occasional bird, snake or whatever else needed some type of investigation. I managed to locate three Texas Horned Lizards much to my excitement, including one little fella no larger than my big thumb. 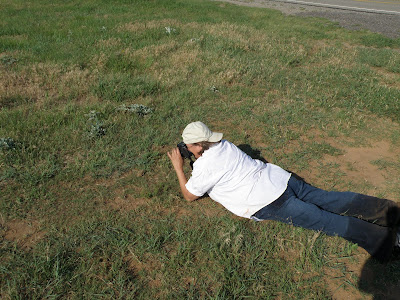 A very tiny, and most likely unhappy Texas Horned Lizard; I was gentle with it though! 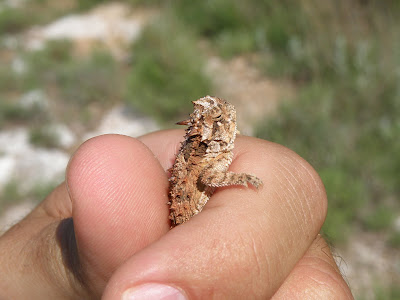 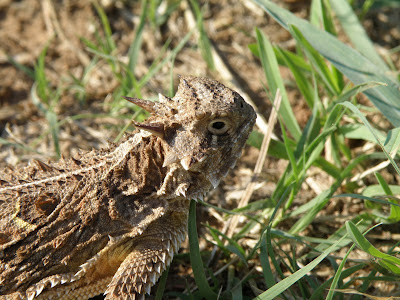 A particularly photogenic individual, i think I was about three inches from it at this point. 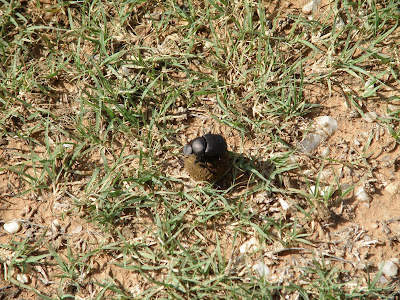 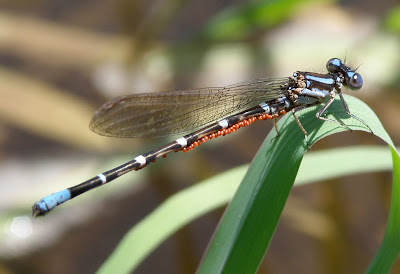 Mites on the abdomen of a Blue-ringed Dancer 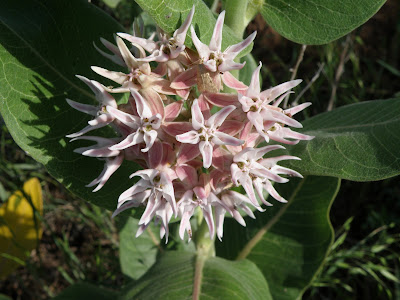 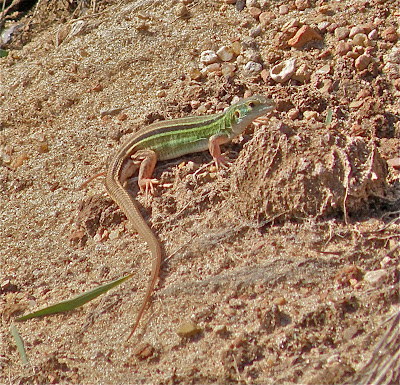 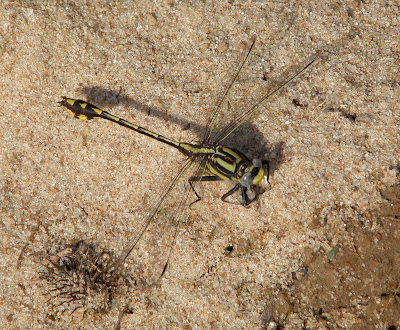 One last short bit, the Odonata were a good deal of fun. I managed to add three new species to the Harper County list. The opening photo of the post was of a pair of Desert Forktails (Ischnura barberi), one of the only species I located along the Buffalo Creek Salt Flats, the others consisted primarily of Familiar Bluets (Enallagma civile). Above is the documentation photo for a Plains Clubtail (Gomphus externus), I found this female along Buffalo Creek as well, a little further west and not along the salt flat. The final addition to the county record list was a Sulphur-tipped Clubtail, I chose not to add the photo but it's a good looking bug! Well, onto the next adventure. Next time around, more stories from SE Oklahoma and the Bachman's Sparrow Overdrive show!
Posted by Eric Beck at 2:45 PM