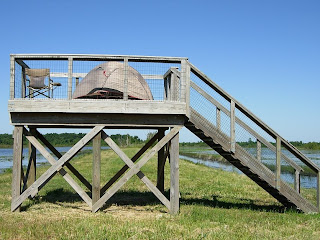 So I have been at the Red Slough in McCurtain COunty Oklahoma for 4 days, which is why I haven't posted anything. Unfortunately the accomodations at Beck Basecamp were laking an electric plug and internet service(see photo). They weren't short on bugs at night or birds during the day though. Actually the observasation platform was a great place to camp, and it kept me up and away from those ferocious little fire ants. Unfortunately it's a place that is not open to public camping. I was given special permission to camp there while doing my surveys. But don't let that stop you from going to check this place out. The more time I spend there, the more I like it. So for those of you that don't know. McCuratain County, Oklahoma is down in the far south-eastern corner of the state, it shares a border with both Texas, and Arkansas. Its far enough in to the "deep south" that it actually has alligators!

Alligators were constantly on my mind this weekend, but I'll save that for later. Beck basecamp was actually very comfortable and enjoyable. Fortunately it was a beautiful weekend and I slept without the rainfly on my tent, which was nice when viewing the stars, and catching a soft southern breeze. But, one evening it did start to drizzle, which is why the rainfly ended up on the tent by the end of the weekend. Oh, well. I enjoyed the view and the breeze while it lasted. Sounded nice though didn't.

My surveys are in the morning and evening, so a couple of the days I spent a few hours sitting and counting birds on the two lakes that I was camping between, Pintail and Lotus. This was actually also very productive in that I gathered a great deal of information and better uunderstanding on the movements of the Common Moorhens and American Coots, and yes these are rails also, between the two lakes. So during my time hanging at my own personal deck party I did see some really fun birds. Highlights from those day time counts included approximately 300+ Black Terns all feeding on Lotus Lake. They would skim around the surface picking up midges and other things I suspect. After a while they would all start circling skyward, clumping into one large drifting dark cloud of beauty. Oh, it was wonderful. Even better when I was out searching for nests on the lakes in my canoe and I found myself among the mass of feeding individuals, now that was cool! 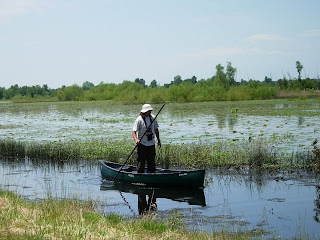 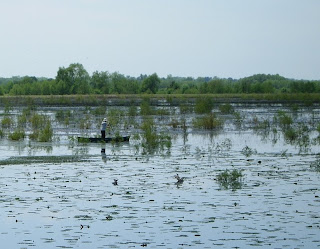 Yes I did try to get photos of these guys while in my canoe, unfortunately I am not a photographer. Other fun birds where Anhingas, Neotropical Cormorants, Black-bellied Whistling Duck, and the occasional Least Bittern either heard or seen to the east of my camp in one of the units packed solid with Spike Rush. On the story goes!

Saturday while searching for nests on Pintail I felt like getting some sun, so off came the t-shirt. Bad Idea! Ouch, can you say nasty sunburn. Yeah I know.....sun screen was invented for a purpose. Mom I know you are reading this, and I can picture you saying exactly that at this moment! Sunburn aside it was a productive couple hours, unfortuntaly I only located a couple of Pied-billed Grebe nests (photo on the left), which would total six by the end of the weekend. This is no big deal. They are actually pretty easy to spot, a floating mass of vegetation that sometimes resembles a nest. The only rail nest that I actually got a good look at was this Common Moorhen (right photo) nest that David Arbour pointed out to me. He had located it a few days prior. If you look at the eggs, you can see how different they are from the Pied-billed Grebe, which has no spotting, and is a completely different color, unless the egg has been stained by the wet vegetation in the nest (so the spots you see on the left are nothing but staining or pieces of dried vegetation, you can see the difference when compairing the two photos). Good things to know when you're out looking for specific species, and their nests. 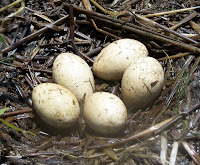 Nests were on my mind alot this weekend. There are a couple of species that have never been found nesting in McCurtain County or the Red Slough. Hopefully I will be able to locate them and add to the knowledge of these species ranges. One such species is the Virginia Rail. I did find two adults birds, that were associating with one another. David and I looked for a nest for a little while but came up empty. I'll be back down in a week or two and should be able to locate the nest then...hopefully. David described our search as looking for a needle in haystack, so that gives you some idea as to the difficulty. Another rail that I am looking for nests for is the American Coot. I know that sounds crazy, but there has never been a confirmed nest at the Red Slough. I searched in vain for a while, but never found one. This maybe due to the fact that the vegetation in the lakes is still very short. Reference books say they like alot of cover to conceal their nest, right now the Slough doesn't have that much of it in their lake units. But soon enough they will, and then look out.

Well I've rambled on enough I suspose. I'm home and have errands to get to. I'll get some more of the story posted later. Bye for now.
Posted by Eric Beck at 12:43 AM

Eric, I live in Minnesota but bird a couple of times a year in Oklahoma. That's how I found your blog. Just wanted to say that I really enjoy your comments and pictures. I look forward to reading about more of your adventures. Your posts from Red Slough have made me more determined that ever to spend a couple of days there on our next visit.