A Meeting of Ornithologist in Mobile, Alabama 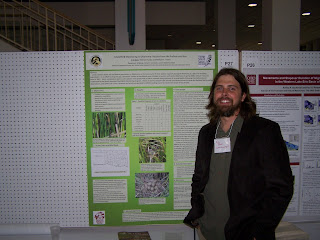 I am taking a short break from studying for my finals, and thought I would try and ketchup on some of my latest adventures. The weekend after the Boots, Buckets, and Chickens event was spent schmoozin' with other bird nerds. From the 16th through the 19th I was presenting a poster on my Marhbird research at the joint meeting of the Wilson Ornithological Society and the Association of Field Ornithologists in Mobile, Alabama. This was my first large national ornithological meeting, from what I hear it doesn't even compare to the AOU meeting. But hey, I had a really great time, and learned a great deal.

First, my poster! Basically it was a bit of general information about the project, and then I added some highlights from the preliminary season (last spring/summer'07). Unfortunately we had so much rain last year most of my season was flooded out, however I still managed to find some goodies out there in the marshes of Oklahoma. The poster session was Friday evening, and I had some people come by and talk rails. Which I could do for hours. Its really interesting to run into people that are doing similiar research. You can share stories, bounce ideas off of one another, and just have a really good time with a complete stranger.

It was funny to see the reaction from people when they realized this work was being done in Oklahoma. It's definitely not a coastal state, and that's were most marsh bird research is happening. It gets even better when you tell them about the possible Black Rail populations in the state. Who would have thought, Oklahoma! Anyhow..good fun.

On with the story. So I have to admit. Yes, I did skip a few sessions to go out to Daphin Island to do some birding. Fortunately the crew from OSU (Andy George, Vic Cavaleri) were down with it as well. The three of us got in a hot, fierce birding battle with Tim O'Connell and Paul Rodewald from Ohio State. Some how those two old guys managed to bag a few more species than we did. You know it's probably age catching up with them, when you start going blind your bound to see good birds! Even though we were defeated by ten species we still managed to scrap up 101 for the day.

Perhaps the highlights for me were a handful of lifers that we happened upon. I picked up one of my nemesis birds, the Blackburnian Warbler. Actually the warbler was a lifer for Andy as well, so I didn't feel so ashamed. Having lived in the northeast, traveled through the smokies, and checked numerous hot beds of warblers I've never managed to get this bird, until that weekend. Boy what a looker! Two more lifers were a Sandwich Tern, and a Gull-billed Tern. 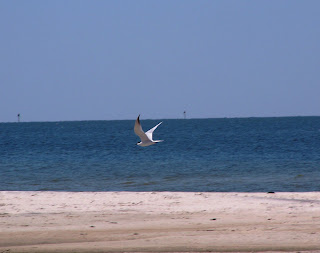 Then there's the Reddish Egret which provided me with a nice little video of it's crazy prey catching technique, also a lifer. Which I will post as soon as I figure out how to attach videos to this thing!
Oh, and then finally there's the Clapper Rails. Yeah I wish my birds were as easy to spot as those guys down in Alabama are. They were out walking around mid-day, swimming, klakking, and making noise, it was great! I managed to get baptised by a saltmarsh, fully submerging my feet in about thigh high muck. Actaully, I have to admit. I really love getting dirty in a new marsh; I know, I know, that sounds really crazy, but it's true!

Anyhow it was a lot of fun, and the meeting, papers, and posters were exceptional!

I can't wait to return 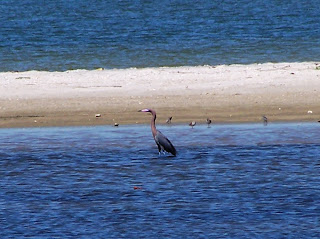 Hurry up with your finals -- we miss your postings and travels around Oklahoma!