A Day in My Favorite Region

My first experience in the NW/Panhandle region of Oklahoma began a few years ago working on the Sutton Center's Lesser Prairie Chicken project. From that moment I pretty much fell in love with the region. I just love the smell of Sandsage on a cool morning with a light breeze. But, before I go and get all poetic about it, I'll get to the story. I spent the evening last night driving to Beaver County, and finally arrived at the Cimarron River at about 1 am, put the tent up, blew up my air mattress and snuggled down to some light reading. Bent's Life Histories of North American Marsh Birds, specifically the section on Black Rails, preparing myself mentally for the morning.

A few hours of sleep (about 4) and I was up and making my way to the first calling point. The morning progressed and unfortunately no calling Black Rails. I didn't let that get me to dissapointed, the marsh was drier than I have seen in past years and sometimes birds don't always do what you expect. Still I managed to located a pair of Virginia Rails, and a single Least Bittern, and that is where the story turns almost comical.

I had finished my survey and was walking back to the location where the Virginia Rails were detected, in hopes of securing hard evidence for breeding. I like to confirm breeding in every county with a nest, and have still manged to miss a Viriginia Rails (VIRA) in Beaver County. The presence of associating adults is pretty much a sure thing for breeding VIRA evidence however, this is not always adequate for record keepers. While walking back to that location I heard a familiar call, but just one. I stopped and listened and failed to hear anything else, but felt sure that a Least Bittern was lurking about somewhere. I walked around a small pond and caught a glimpse of something moving, sure enough there it was, a single Least Bittern stalking along the edge pf the pond. 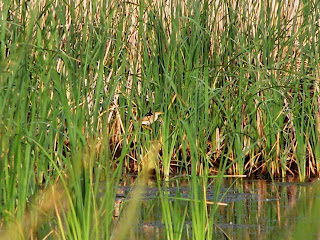 Finally something exciting for the morning, nearly making up for the missing Black Rails!

It was still early in the morning and cool, so I decided to do a little nest searching. I placed my gear on the ground and headed into the marsh with my binoculars and camera. I worked my way to the edge of the pond where I saw the bittern, and that's were things began to get a little messy. Before I knew it I was over knee deep in water, I took another step trying to get myself released from the muck on the bottom, and then it dropped off a little more. There I was standing nearly chest deep in water with the muck up to my knees keeping me from moving any further. When I looked down my Nikon Monarch's were completely submerged and my camera only an inch away from the end of its existence. I took them off my neck and held them high and proceeded to use my other hand to pry my legs out of the bottom of the pond. Five minutes later I worked myself out, and managed to take a picture while being only knee deep. 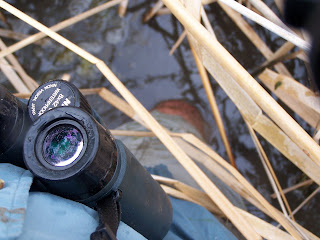 My binoculars made it through the ordeal, and never fogged up (thank goodness!). I searched for a nest for another hour but never located anything. I also missed out on the VIRA's, but hey still a good and exciting morning.
After that I took the next few hours to check a few of my favorite spots in the region, including a small pond north of Laverne in Harper County. Much to my surprise there were four American Avocets hanging about. Using my scope I spotted a single bird sitting on what appeared to be a nest. After getting permission to enter the private property I walked out to confirm and was pleased to find it with three eggs. I left quietly and waited 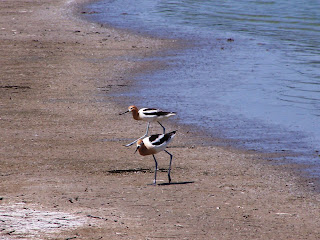 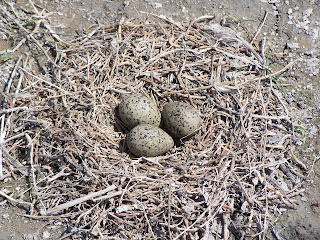 a hundred yards away and watched the female return and settle down.
Even without the presence of Black Rails I was pleased with the morning. I have a little reading to do, but from some early conversations with Dan R. at the Sutton Center the Avocets seem to represent a first breeding record for Harper County. The Least Bittern may represent a first record for the Panhandle but that requires some checking. Well for now that's about it.......till next time.