Moore from the Slough! 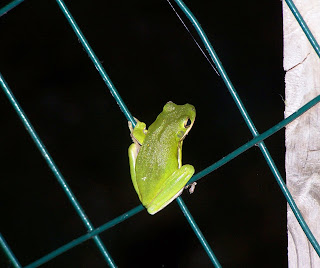 Another night at the Red Slough, fortunately this evening I am sharing the deck and a late evening meal with a green tree frog. I am munching on some almonds and raisins; the frog, an assortment of mayflies, multi-colored beetles, and spiders. We both agree that it couldn’t get much better. There’s a nice light breeze and the mosquitoes aren’t much of a bother.

It has been a very long two days. Yesterday was spent helping the Nickel Preserve do its annual breeding bird count; it’s always a treat to see my good friend Doc Revels, who helps with organizing it. This was my first visit to the preserve and I enjoyed it thoroughly (except for a nasty message from a disgruntled bird watcher when I got a chance to check my email!), even though I had managed to get only three hours of sleep the night before (no I was not partying!). Basically, just a late night drive followed by uncomfortable sleeping arrangements in the cab of the pickup. I met up with Jean and Martin B. and rode with them to the preserve. The count included a few highlights such as a pair of Scarlet Tanagers, a Blue-winged Warbler, and a very nice look at a Snowy Egret foraging in a small woodland stream. I am used to seeing them in large water impoundments or man made wetlands; it was a nice break to see one in truly natural habitat, and me without a charged camera…..duh! Following the count we traveled back to Tulsa and had a lengthy Oklahoma Important Bird Area meeting until around 12:30 ‘ish, and then finally a good nights sleep.
The drive from Tulsa to the Slough was long and uneventful, except for a biker gang that happened to be taking a break at a rest stop. I played the ever watchful observer, and wondered if I could ever be that much of a bad-ass. I mean these guys weren’t your latte’ drinking weekend warrior bikers, they were serious and just their presence demanded attention. Silently I moved on, as if watching an American Bittern foraging for its early morning meal, hoping not to disturb. Onward to the Slough I pushed.
Upon arriving I made the turn onto the road that takes you past Otter Lake, and then over to Pintail and Lotus Lakes, the site of Beck Base-camp for the next couple of days. The first bird or at least my first observation was of a Great-horned Owl cruising past the truck and over unit 37, all the while being mobbed by very unh 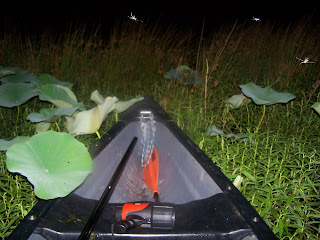 appy Red-winged Blackbirds. It found a perch in a Willow tree; I snapped a shot and then moved on. The rest of the evening was spent nest searching for about an hour and a half, most of which took place in the dark. I located a single Common Moorhen nest with nine eggs on Lotus Lake (not the same nest from my last visit, this was a few hundred yards further down the levee to the south). I was also able to take a photo of a Purple Gallinule on Pintail Lake before the sun set. 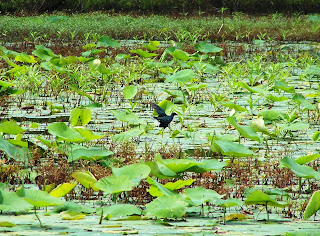 Looking for nests in the dark is not exactly easy. It can be a little unnerving when ever there are two big, orange gator eyes staring at you from less than a hundred yards away in the dark. I would check his position ever five minutes or so, I think it was as wary as I was because it eventually moved out of sight. You know all those years of watching scary movies about attacking gators and sharks doesn’t help you feel at ease in the dark on open water in gator country. Unfortunately I wasn’t able to locate any nests on Bittern Lake, so my tally stayed at one for the evening after having located a Moorhen nest on Lotus Lake with 9 eggs.

My evening companion has shown back up, presumably after a short hunt on the backside of my tent. A bit of a unnatural setting for the guy, but I think he has been pretty successful with his novel approach and use of a man made structure as hunting grounds. That’s it for now, on to bed.

Just a note, this was written at the Slough, I couldn't find any oppurtunity to post it until now. The next post should be very interesting including many shots of various marshbird nest and some fun stories to go along..stay tuned
Posted by Eric Beck at 2:08 PM