336 Miles, Hackberry to Laverne and Inbetween 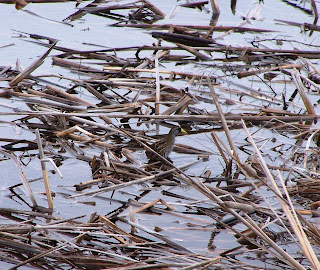 Monday (11-May-2009) evening at Hackberry was overcast but productive. My survey route ran the east west levee of the Goose and Yellowleg Units. The highlights of the marshbird survey included 2 Sora (Porzana carolina), 3 King Rails (Rallus elegans), an American Bittern (Botaurus lentiginosus)and two unidentified medium sized (most likely Soras) rails. I picked up some great birds along the way. Ibis were everywhere (225+), conditions wouldn't allow proper identification so there could have been Glossy present but I can't be sure. A flock of 22 Willets (Catoptrophus semipalmatus), were seen and heard flying from one unit to another, and shortly after a flock of around 35 Godwits (Limosa sp..) . Conditions remained bad but I countinued and it paid off. At around 2020 hrs I located 13 Ruddy Turnstones (Arenaria interpres), there were probably more but the conditions were so awful I could only make out the individuals that were in the open and clear. Fortunately they really stand out in their alternate plmage, I didn't even bother worring with peep identification. 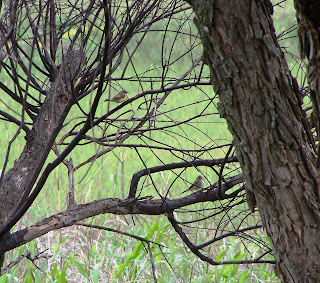 The good birds continued the next morning (12-May-2009) with a Virginia Rail (Rallus limicola) and King Rail. After surveying for marshbirds, I turned my attention to birds in general and decided to stay in the area until noon. This to paid off and throughout the morning I picked up an American Redstart (Setophaga ruticilla)and Least Flycatcher (Empidonax minimus) in the south boundary willows. I added 5-Black-bellied Plover(Pluvialis squatarola) and Buff-breasted Sandpipers (Tryngites subruficollis, 6; a first for me at Hackberry). Lots of other great birds were present but most were the usual suspects for this time of year. 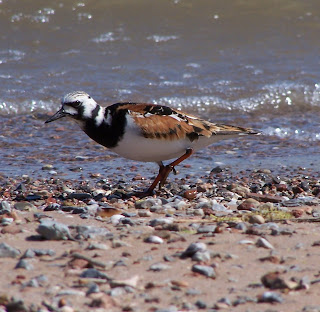 I moved on and north to Fort Supply and was greated by yet another Ruddy Turnstone. This guy was all alone, except a single Semipalmated Sandpiper (Calidris pusilla). This brings my spring total to 15+ Ruddy Turnstones; just think up until this year it was a state bird for me! This individual was particularly tame and I was able to lay on my belly from about ten feet away and took loads of great full light shots, this one was especially good.


Fort Supply was nice, and quiet, and empty. Just the way I like. Through the 20 hours that I was there the birds worth mentioning included 7 Forster's Tern (Sterna forsteri) , lots of Spotted Sandpipers (Actitus macularia), 23 Yellow-headed Blackbirds (Xanthocephalus xanthocephalus), 36 Plegadis Ibis, 2 Black-necked Stilts (Himantopus mexicanus), a family of Eastern Phoebes (Sayornis phoebe), and one unidentified Catharus thrush. Well tomorrow includes surveys of some sloughs associated with the Beaver River just north and east of Laverne, and then on to Black Rail territory so stay tuned!
Posted by Eric Beck at 8:29 PM