So yes there was infact a Ruddy Turnstone (Arenaria interpres) today at Hackberry Flats WMA around 9:15 am. But no, there wasn't a Red Knot; I just couldn't avoid using the title, it just came too quickly. The turnstone wasn't the only good bird though, so keep reading. 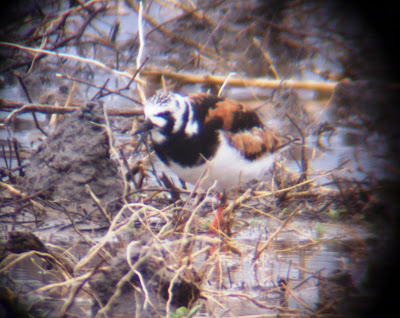 I spent last night and today wrapping up my first rounds of marshbirds surveys for the 2009 season down at the now sopping wet survey site. Last week I visited the flats as well, and things were a whole different story. I was actually considering not going back this year because it was so dry. What's the point in looking for marshbirds in dry habitat? Well I'm glad I did go back to check it out. No marshbird photos, although I had a one Virginia Rail (Rallus limicola, 2-May-2009) and Sora (Coturnicops noveboracensis, 3-May-2009) each, both responding to broadcasts. Now that things are adequately wet at the flats I suspect we'll begin seeing the usual numbers of rails, ect. for our wet springs.
Some other highlights included Yellow-headed Blackbirds ( Xanthocephalus xanthocephalus, approx. 64), White-faced Ibis (Plegadis chihi) , and a single Glossy Ibis (Plegadis falcinellus). Ok, so the Glossy Ibis photo sucks more than usual, I'll try to explain what I saw in the field. The small white lines (moderately visible in the photo) that outline the dark lore had a bluish tone to them. The lore, unlike the other adult Plegadis sp. present, was a dark plum kind of color. Distinctly not the pinkish lore surrounded by white that you see in P. chihi. I observed the bird from about 85 yards or more, for about fifteen minutes. It was pretty over cast, however it was late enough in the morning that the sun was breaking through at points. So the light and brightness could have been worse! What I didn't notice until I got the photo home is that the green on the head of this individual looks as though it wraps around and below the base of the bill, making the head appear dark. Now in my field guides this varies to a degree between authors. In Peterson's and Sibley's they both show a darker head for the Glossy. My Nat. Geo. does as well, be it a little more defined. I guess what I'm getting at, is this a field identification mark that you could use while picking through adult Ibis?
Other birds of particular interest were a couple Semipalmated Plover (Charadrius semipalmatus), a single Black-bellied Plover (Pluvialus squatarola), one Dunlin (Calidris alpina), and at least 14 Snowy Plovers (Charadrius alexandrinus). I walked four different tree out croppings after my marshbird surveys, hoping to pick up some neo-tropical migrants that may have dropped out during the weather....no luck. Well that is except for an unidentified Empidonax, and a handful of Yellow-rumped Warblers (Dendroica coronata). There were plenty of Clay-colored Sparrows (Spizella pallida), and about 6 Ruby-crowned Kinglets (Regulus calendula), and oops almost forgot 3 House Wrens (Troglodytes aedon)! This was a first for me at Hackberry and I was little surprised to see them to be honest. First of the season as well.

Along the way I found a couple of nests, so I thought I'd share them as well. 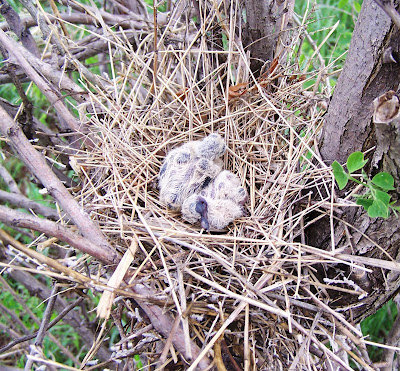 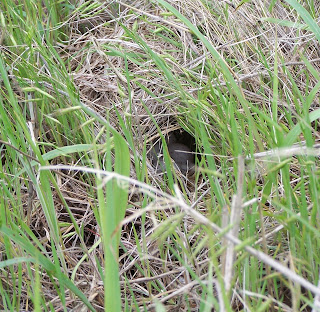