A Hoot of a Night! 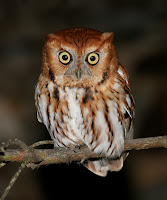 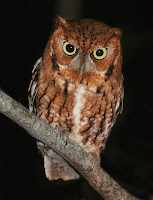 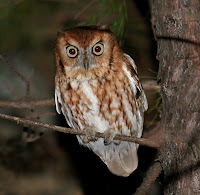 I have had a few run-ins with owls of varying species over time but I have never actually spent a night "owling". On the 8th of February Steve M., Kim W., and I ventured to south-eastern Oklahoma to owl the Winding Stair Ridge, which is along scenic highway 1 in LeFlore County. The sky was crystal clear which allowed great views of falling stars and constellations throughout the night. We met at 7:15 pm and kept on until the wee hours of the morning (2:30am). Our true intent was to locate a Northern Saw-whet and we were fully aware of the probabilities(very slim), but this year they have been found in Alabama and a few other far reaching places throughout their range, so why not give it a shot?

We stopped at approximately 20 locations, to be honest at about 1 am I was beginning to get a little tired and probably forgot to jot a couple spots down where we failed to find any birds. We totaled 15 Eastern Screech, 5 Great Horned, and a single Barred Owl. Unfortunately no saw-whets, with the presence of the larger owls a lot of the smaller guys were staying pretty quite. The screech owls sometimes showed up without a sound, and Steve and I would get lucky and spot one with the mag-lite. Fortunately Steve is a world class bird photographer and he was able to get a bunch of really great shots, some of which are pictured here.

Perhaps the really exciting thing about the night (at least to me) was seeing the variation among the individual screech owls. One bird had an unusual amount of white on it (pictured), it will be interesting to hear some comments about that particuliar bird. A quick story before I go.

We had called in a particuliar individual and couldn't locate it. It would call from the left, then the right, then in front of us, and then from behind. Steve and I were standing there waiting to hear it call again when I turned to face him. Just at that moment when I turned with my flashlight the owl came into view. The light was shining just past Steve, and about that time I think it figured out what was going on. He put his breaks on which gave me a wonderful look at its fully extended under wing, and all of this just a few inches from Steve's head! He nearly got scalped. Steve finally got a photo of it, which I'm pretty sure is the third bird in the sequence.

Awesome photos. I'll be trying to get similar photos of my backyard's gray pair.

You can look into their nest box at:
http://www.squirrelhouse.com/enter/owlboxwebcam.html