Owls, and Woodcocks On My Mind!

Well at last I have enough stamina to post something to the blog. I left off with a Barrow's Goldeneye, alot of good birds have come and gone since that time. I think I have added a few thousand miles to the truck as well. I guess the good side of all of this is that I have been able to work up a few good stories. 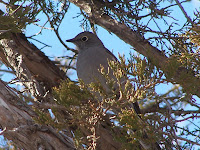 Let's see I have been to Cimarron County and back. That always makes for a fun trip. The best birds were two unexpected Burrowing Owls, and a Northern Shrike. None of which I was able to photo. I layed on my belly for about twenty mnutes a few feet away from the Burrowing Owls hole, hoping to get a good photo of his big yellow eyes peering out, unfortunately that did not happen. The shrike was a life bird, and I became so captivated by it that I forgot to get a photo, which would have made for a good shot considering it was perched about ten feet outside my passenger door window! I actually thought I had two, but examination of the photos of the second bird and a discussion over it with Mike Husak laid it to rest as a good looking, hook-billed Loggerhead. Oh well, maybe next time I actually see one I'll have the photo to prove it. 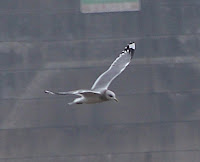 Hmm, what else. There's the Mew Gull at Kerr Lock and Dam. That was also a life bird, and one for which I will not likely top this year. I'm not sure how I managed to find that one. It was in a flock of aproximately two thousand swirling ring-bills, and bonapartes. They were all feeding below the dam. This bird I did manage to get a photo of! It was also present the next morning, fortunately for a few birders who were able to get it on their Oklahoma and life lists.

There are a lot more interesting things to tell you about. Like getting mired in three feet of mud, north of Panama in LeFlore County. I will save that one for later though. Currently I am in Antlers. I spent the day in Atoka Co, chasing loads of Purple Finches around. As a matter of fact the first bird on yesterdays block was a female purple finch, and today another female managed to be the third species located. Your probably saying big deal, I have eight of them at my feeder. I say to that, it's more fun to find them ( aprox. 35) in the wild! I actually got to hear one give its breeding song, something that I haven't heard before. I guess the beautiful, warm day had everybody feeling good. The male bluebirds were practicing for the upcoming spring, oh, and so were the Woodcocks!

That's right, 1 mile north of Antlers on a county road I located two displaying woodcocks. Which, if you are keeping track (and I am) makes this the second year in a row where I have found them displaying in Febuary (today counts as the earliest though), top that Revels! Anyway, I need to find a place to camp so I had best wrap this up. I am hoping to get a very early start in the morning. Owls, and wodcocks on mind, I'll keep in touch. 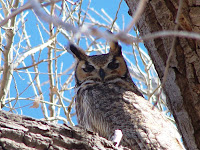