Ahh yes, a life bird. Some people get all buzzed up on a life bird. If it comes to early in the day and they don't find anything else worth jumping about, the buzz weares off. Fortunately I'm not one of those people. I stay rather composed when I get a life bird in public, as a matter of fact most people probably don't even know when I get one. But, catch me alone and it's whole other monster! I even get all jumpy talking about it, and it happened almost two weeks ago.

I was heading home from Harper County and decided to stop by Fort Supply to see what was happening, and to get a lake survey done. The lake was nearly 70% frozen over, but there were hundreds of waterfowl out in the middle where a few open areas remained. When I finally reached a location close enough to actually see what was out there I was happy to find several hundred (aprox. 275) Common Goldeneye's (COGEs), as well as around 75 HOMEs, COMEs, and a few other less numerous but more common species. This was by far the most COGEs I had ever seen at one gathering, and judging by the number of northern vsitors we have had this year, I knew that the chances of finding a Barrow's (BAGE) Goldeneye was pretty good. So, my search began. 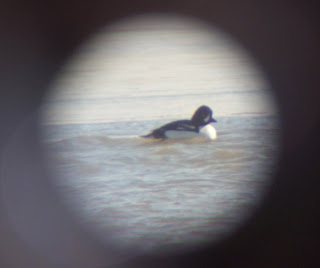 Aproximately 20 minutes, and ten frozen fingers later I was pleasently suprised by a single male BAGE. Oh, the joy, the excitement, and yes, the lifer monster jumped on my back and we bothed danced a good jig and hollered. I'm sure if someone where to have seen me at this point they would have thought one of two things. Jeez, it's 8 in the moring and this guy is drunk, or this guy just escaped from the prison that is across the highway! Luckily no one one was there to see me.. ha.ha. I know, I know you would love to see this. However it is my duty to remain calm and reserved in the presence of other birders and bird type researchers. Just thinking about the story get's me all fired up!

A little about the photo. It is digiscoped from about 175-200 yards away. Suprsingly it turned out pretty well, compared to all of my other digiscope attempts at rarities, this should be on the cover of Nat. Geo!
Posted by Eric Beck at 6:05 PM