I have finally returned from my venture to the Oklahoma Panhandle. Unfortunately I was not able to post anything new to the blog while I was out there. For two reasons, first, the locals don't believe in Wireless. Second, when I actually had a chance I was too exhausted to get any of my thoughts together. Now that I am home and a little relaxed and rested I will attempt to share a little of my trip with you.
Every chance I have had to visit the Black Mesa country has been constricted due to other obligations. Well I finally had the oppurtunity to put a little time in. I had four atlas blocks that surrounded Boise City. This gave me plenty chances to find life birds (4) and learn a little of the countryside. So I bet you are wondering what new birds I found while I was out there. Well I picked up two new thrashers (Curve-billed, and Sage), a Western Scrub Jay and oops, well I guess it was only three. Still, very exciting! 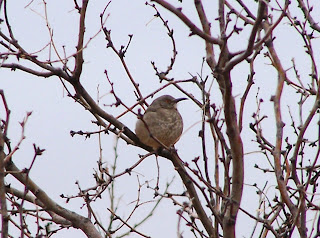 A really neat thing happened while I was walking around the mesa country. I walked around the edge of a bluff, turned and there no more than fifteen feet from me was a Western Screech Owl! I suppose he was taking a morning siesta, he just sat there, I took a few photos and then quietly walked away. Not long after that I called in a Scrub Jay. The jay was a life bird, the owl wasn't, but it was certainly the best look I have had at one. 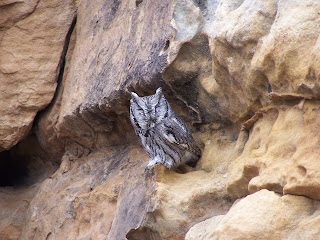 The nights were cold, mostly around 10 to 20 degrees, and I spent them in the back of the pickup in my sleeping bag. Usually around three a.m., I would wake up due to some portion of my body being too cold. It might have been an arm, I would move it, get warm, dose off, wake up because my back got cold, and so on until I would finally get up and crawl out of the back and into the front where I would proceed to turn the truck on and warm up for ffteen minutes. So no, I really never got a great night's rest, but who cares with all of the great birds out and about?

A few last thoughts. Cimarron County is certainly an amazing place. When you find yourself in the Mesa country it's as if you have stepped back in time. I couldn't help but get nostalgic thinking that I may have been stepping where the late great George Sutton himself had been, or even better where no one had stepped (which is unlikely, but still nice to think of!). In fact the Black Mesa was a favorite of George Sutton's, so much so that his ashes were thrown to the wind there. I get to visit Cimarron again in a month or more, and will look forward to it with excitement. Each time I visit, I get sucked into the place a little more, and each time it becomes a little part of me.

I AM FROM BOISE CITY AND MAY I INFORM YOU THAT WE VERY WELL BELIEVE IN WIRELESS. YOU ARE A COMPLETE IDIOT AND I DONT BELIEVE A WORD YOU SAY. PLUS THERE ARE FAR MORE BIRDS THAN WHAT YOU HAVE FOUND. YOU OBVIOUSLY SPENT MORE TIME "TRYING" TO GET WIRELESS. I AM NOT TRYING TO CAUSE PROBLEMS BUT YOU ARE NOT WELCOME TO BOISE CITY ANY LONGER.