Doby Springs and an Icy Mishap 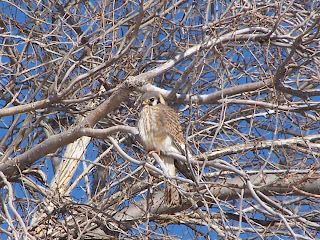 I know, I know, it’s been a while. Over a week, at least! I last left off on a trip to the panhandle, and the places that I visited after that were in Beaver (still in the panhandle) and Harper counties. I actually surveyed a location in Texas County however it didn’t amount to much. So let me take you back with me to the point in the story where it becomes mildly entertaining. Hey, there is even just a tinge of danger in this story. Not James Bond like danger, more like, you should have been paying more attention, you could have killed yourself!
A winter storm had blown through the panhandle, nothing too terrible a little snow and ice. Mild compared to some of the storms that can beat down this region. I was cruising to an atlas block in Beaver County, and was driving along a country road that skirted the western boundary. I was doing around 25 mph, the road had a small bit of ice. Well, that all changed as I got to the top of hill and started heading down. By the time I had noticed that the entire road was an ice rink it was far too late. The trucks rear end started fish tailing, I corrected, it got worse, then it got real bad, and then it threw me around 180 degrees. I ended up safely in a ditch, facing the direction I had just come from. I took a moment to breath, shook my head, dropped the truck into 4-Low and drove out of the ditch. 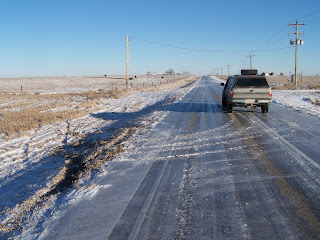 Needless to say, the rest of the day was pretty much safe. Although a rear tire picked a nail up at some point, which sent me heading towards Harper County and Laverne. The sweet sanctuary of the Oklahoma Lesser Prairie Chicken Project Headquarters, and a new truck until I could get the tire fixed the next day, since it was a Sunday.
The block I ended up doing in Harper County was highly productive, and I actually acquired some company from Kathy, one of the field technicians that works with LPCH’s. Centered in this block was Doby Springs. If you were to read a little of George Sutton’s Oklahoma Birds, in the beginning of the book (if my memory serves me correctly) he mentions some of his favorite stomping grounds. Doby Springs is one such place. This little hot spot is a great place to stop and look around. There are ancient cottonwoods and various other species that make this a great place to check for wandering birds of either western or eastern origin. Marsh wrens were abundant around the small pond and cattail chocked stream, I was able to get an Eastern Screech Owl to respond to my call. I also ventured into new territory and gave an attempt at a Barred Owl call. I won’t comment on how well that went, but no more than ten minutes after I did this we found a Barred Owl not far from where we were. You decide whether or not it was successful attempt! The topper for the day had to have been the Short-eared Owl that cruised past the truck at sunset. Kathy may not agree with that last statement.
As we walked around the trails at the springs we found ourselves on one of the more tucked away ones. Just after we heard the Screech Owl, I was standing at the top of a very short down hill slope. The trail was a little muddy, but no worries. Well I took a step, and then my left foot proceeded to come out from under me. About the moment I caught my balance the other foot left the ground. It all seemed like slow motion, and sooner than later both feet were in the air, I was on my rump sliding down the very muddy trail, Kathy laughing. No I didn’t get hurt, just muddy. In fact I had slipped on some ice at home and had been battling with a hurt lower back all week. I think my little slip-slide down the muddy hill actually corrected the problem, so who needs doctors!
Posted by Eric Beck at 5:51 PM