Wind, Rain, and Some Red Crossbills! 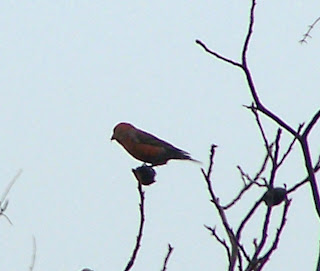 Well maybe I am a weather man, yesterday I predicted a 90% chance of rain for today and was right on the money. I picked Michael H. up around 6:40 am and after a much needed stop at the local Starbucks for a Venti 3-pump Toffee Nut Latte (mmmm..), we were off. I think we were both wondering what the hell were we thinking going out to chase birds on a rainy, windy day. All the same, we were on our way.

Even though we had a morning with pretty steady mist and moments of drizzle we managed to tally 75 species. Not bad! We really didn't have much luck until we started hitting the more secluded spots. This may have been for two reasons. First, there wasn't nearly as much wind (obviously), second, Mike finally stopped complaining about the wind and being cold! South Texans don't deal with the cold very well, I suppose I should have a been more understanding (of course this is just me taking a quick and easy jab, with little chance for a witty response from Mike! He never complained.). All jokes aside Mike is superb in the field and I'm convinced if he recorded his phishing and marketed it, he would make a killing. Now that I have made this a known fact publicly I would require at least 5% of all profits.

Well as my title suggests, yes in fact Mike and I located 4-5 Red Crossbills at the Wichita Mountains Wildlife Refuge this morning. Actually Mike first pointed them out and then I proceeded in attempting to get at least one decent photograph. Alas, I am not a photographer. But I do have a funny story that goes along with this, since my photo is pretty sorry!. We had been observing the birds for nearly ten minutes, they seemed preoccupied with feeding on the bunches of Pecans that were still left hanging on the now mostly naked outer branches. I decided to try and get a closer photo, so I proceeded getting as close to one as possible without scaring it off. Well, I got within ten feet or so, put my camera to my eye......and then nothing, the screen was completely black. Whoops, forgot to turn it on, I proceeded, put the camera back to my eye, all black. Damn, I never charged the camera. So unfortunately the only documentation photo I have is the one that is tagged along with this story.
Posted by Eric Beck at 3:42 PM

It looks a little bit like White-winged to me, but that could be an artifact of the photo. Cool to see any crossbill in your neck of the woods!

We were able to study them pretty well for about fifteen minutes, so I'm pretty confident with the id even though the photo sucks! It was actually an OK bird for both of us, so we were stoked.