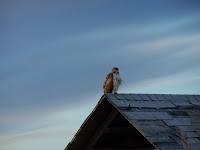 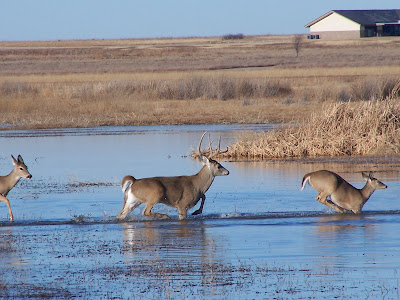 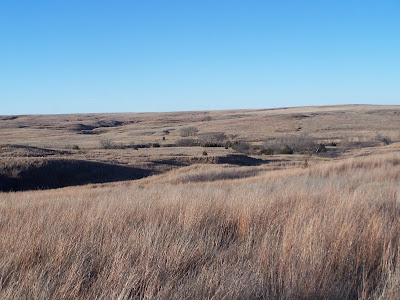 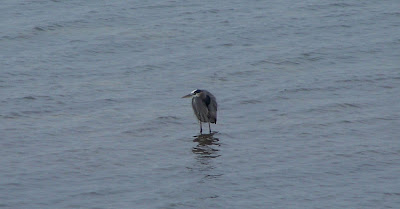 Lake Texoma is quickly becoming one of my favorite places to find birds in Oklahoma. I was able to spend the entire day there yesterday and doing so brought back some fond memories of years past on the Oklahoma Winter Bird Atlas project. Over the past two years I was able to make only a few quick stops at the most convenient locations on the lake, due to time constraints and schedules.
Yesterday I was able to spend an entire day devoted to it, and it far exceeded my expectations. My day (and count) began at 8am, after having breakfast in Coalgate, Oklahoma just in case anyone showed up to do the Lake Atoka CBC, which no one did. I really didn't have the time to go out and "shake the bushes" for help. I think there were also some weather issues in the north which may have hindered participation. No matter, it was nice to be out and in the silence, something I've needed for some time!
Lake Texoma is Oklahoma's largest conservation storage lake, but it comes up second in surface area to Lake Eufala, therefore not receiving top honors as "Oklahoma's Largest Lake". All of this according to the Oklahoma Water Resources Board. I began my survey at the dam and worked my way north and mostly west, finishing near the Hickory Creek Wildlife Management Area.
Visibility was at about 150 yards in the morning, fog lifted in the afternoon and the visibility got up to about a mile in some locations on the largest portions of the lake. Temperatures never really exceeded fifty degrees. My modest total species for the day, 52. There were a few highlights for the day. I had no less than four adult Bald Eagles (blue spots on the map), between the eight locations I stopped at(red dots on the map). Between those locations I counted over eighty Forster's Tern, which don't occur in too many other places in Oklahoma in the winter. Shorebirds were slim but I picked up 8 Least Sandpipers, some Wilson's Snipe, and a Tringa sp. A Merlin late in the day was a welcome and a first for me this season. 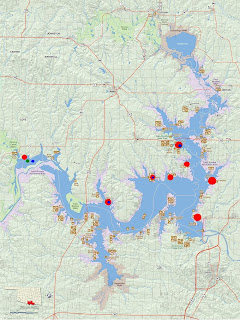 Finally the best for last. At 1615 I located two female Long-tailed Ducks at the Hickory Creek Wildlife Management Area. This was only the second time that I had been to this location and each time on subsequent years its proven to be a nice place to find good birds. The area is a little secluded and I think it has some protection from the big winds of the open lake so the water seems to stay relatively calm. The two LTDU's were just off of the southern shore some 200 yards out (and still in Oklahoma boundaries, I might add!). I found them relatively quickly, the facial pattern sticks out pretty well, compared to the rest of our winter waterfowl. I tried digi-scoping them but opted out after much difficulty. Instead I decided to study them for twenty minutes through the scope. They both dove often, more so than the Buffleheads that were floating near by.
Each time I visit Texoma I find something interesting. Unfortunately it is under-birded. Dr. Doug Wood makes visits; I'm sure not as many as he would like, but he gets out there sometimes and usually has a good list when he gets back. Other than that I don't see or hear any reports from the lake. Some do come in from Tishomingo NWR every once in a while, and some of those have been really good, like Fulvous Whistling Duck and Ground Doves in the past! For a few years now I have wanted to take a boat out and really chase some gulls and ducks, but that has yet too happen, maybe next year!
Posted by Eric Beck at 2:37 PM 3 comments: