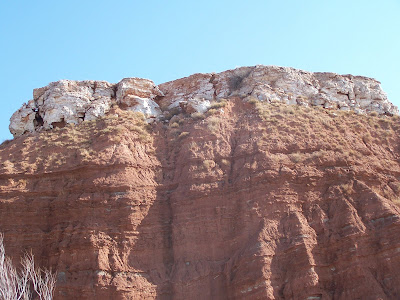 I arrived at the Selman Ranch around 11pm on Monday night (15-March-09), and then got ready for the next morning, which came all to early. Breakfast was great as usual and then out the door just after the first crack of sunlight. I spent the morning and most of the afternoon covering the north portion of the ranch, and had a very pleasing time of it I might add. The map shows my route as well as some points of special interest. Marsh Wrens are abundant on the ranch and very vocal at the moment. The large ponds that the survey route cut through held many calling individuals, spaced out around the edges of the pond in the thick cattails. Very easily seen and heard, and fun to watch. Marsh Wrens are the antsiest little things, they never stop moving. American Wigeons, Ring-necked Ducks, and Redheads were the most common ducks on those ponds, a few Common Goldeneye were with them as well.
I moved north on a small two track through the prairie, parked and then walked a ways. It didn't take long to find a few Mountains Bluebirds (MOBB) still lingering around, and just a few minutes later I heard a few cackles and gobbles from the prairie chicken lek that was somewhat close to that point. A surprising woodpecker made itself known as I walked back to the truck. The first Hairy Woodpecker that I've seen on the ranch (still within its known range), but not the last interesting woodpecker for the day by far.....keep reading.
It would be another twenty minutes or so before another "good" bird came along. I made stops aproximately every half mile, unless something presented itself, which another woodpecker did. A Ladder-backed Woodpecker (LBWO) flew in front of my truck and then proceeded to forage amongst a mixture of mesquite, cottonwoods, and some other unidentified scrubby stuff. I chased it around and managed to get an identifiable photo. This is the second LBWO that I have seen on the ranch, the other was I think two summers ago. 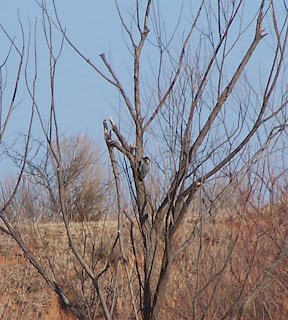 Moving on, I headed back north again, on and over the pennisula that jets out into the Cimmaron River and Buffalo Creek. A couple of Loggerhead Shrikes have set up territories on this north side, and presented me an oppurtunity to freshen up on their songs. More MOBB's and Eastern Bluebirds, as well as American Robins all forgaing on the ground in the short prairie grasses. I checked the Cimarron River briefly and found a couple of Greater Yellowlegs foraging, as well as some dabbling ducks. After that I moved south and parked (good parking indicated by the red "P") at the Buffalo Creek Salt Flats.

Before walking the Salt Flats I looked over the bluffs that were nearest to me, and turned up one Rock Wren (RKWR). Not more than two minutes later a sparrow flew into some kind of a bush very close to the Rock Wren. I put the scope on it and low and behold a Rufous-crowned Sparrow, I watched for about five minutes before I lost it. But that was plenty of time to see the buffy grey breast, tan buff belly, vent, white malar, typical rufous crown; I made some notes, whooped it up real quick and then moved. This was a first record for this species for me at the ranch, and it may be a first for the county, I'll have to do some reading to figure it out. 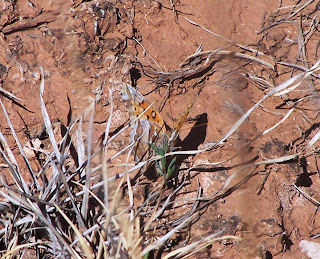 Onto the Salt Flats and lots of Baird's Sandpipers. There were aproximately 300 shorebirds on the flats. Baird's were the most abundant of which I was able to identify aproximately 45, I suspect that the remaing portions were the same species. The foraging group flew a few times and none of the birds stuck out individually so I didn't consider it a mixed flock, although I did turn up one Semipalmated Sandpiper, that was it though. Both species of Yellowlegs were present, Greater's being the dominant abundance with aproximately 9 individuals, and three Lesser. Other than a few Mallards and Green-winged Teal that was it. 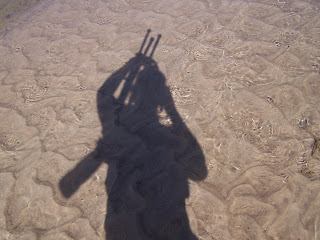 The Salt Flats did provide the other most startling observation.....a Pileated Woodpecker. No, not on the Salt Flats but directly south of the creek there are a number of small and large Cottowood outcroppings. I could hear the bird cackling and whaling away on some trees pretty much the entire time I was on the flats. This bird was not on the Selman Ranch, but it's still worth mentioning.

After the flats I went back to bluffs to search for more RKWR and hopefully some kind of documentation photo of the RCSP. No luck on the sparrow, but I did find more RKWR's including a pair of which I will try to keep an eye on. Butterflies were not numerous but there were a few Sulpher's flying about, as well as a Variegated Fritillary that I managed to photograph...poorly, but you can still ID it which is the most important thing if you ask me. Hey if you don't like the photos send $3k in a stamped envelope to Eric Beck in Lawton, Oklahoma and I'll go out and buy a Canon 40D and a telephoto lense and then we'll talk. 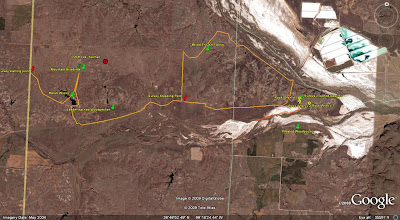 All in all a great day of Selman Ranch birding.......it's unfortunate that this weather is keeping the OK City group from visiting the ranch...rain or shine....I'm sure it would have been fun . Do stay tuned I need to report on the rest of my time in NW Oklahoma last week, and the spring field season is just around the bend.
Posted by Eric Beck at 10:50 AM No comments: