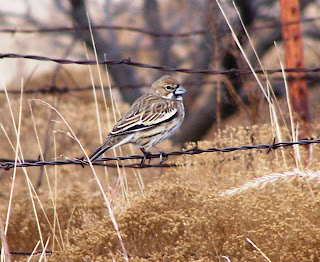 For the last two days I have been surveying a little of northwest Oklahoma, and a little of southwest Oklahoma. Beckham and Roger Mills counties to be exact. Yesterday was mostly clear and chilly, today mostly foggy and chilly. Not especially good days to be out weather wise, but the birds turned out to be decent.

Yesterdays highlights from Beckham were few and far between. I was able to come up with a total of fifty species for the day, the highlights being a single Prairie Falcon, and two flocks of Lark Buntings. The buntings were a pleasant surprise the first flock comprised of 15, the second a larger group of 40+. Surprisingly I was actually able to capture this photo (above) of one of the individuals. The second photos is of a tree that was loaded with them! Well I think one good photo a week is about all that I will ever produce, so the Lark Bunting will have to do until next week. 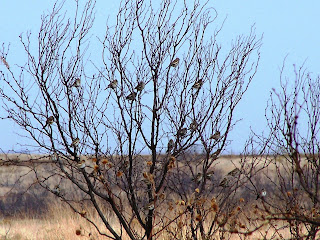 Today I awoke in a fog, literally. I camped at Foss Reservoir hoping to arise to rare gulls and loons. Alas, it was too foggy! I did check anyway and found a few Common Loons, nothing to get excited about though. I moved on to the Washita National Wildlife Refuge headquarters where I found my first Pine Siskens and Fox Sparrows for the year, also present were a few Red-breasted nuthatches, after that it was time to move onto my atlas block.

I cruised the country roads for a little while stopping here and there hoping to find something interesting. Nothing really happened until I reached Wild Horse Creek (I just love that name). I had stopped my truck at a bridge that crossed the creek and was standing there quietly, listening. I guess the landowner got curious and decided to find out what I was up to. After about a twenty minute conversation with Chelmar (very friendly individual), I received permission to walk his property. I had suspected that there may be a Marsh Wren present somewhere along this stream, as it was chocked full of dense cattails. Well not only did find one, but I came up with four! I was actually able to follow the stream for about a half mile and had a great time of it. At one point I reached an area where the stream made a pretty radical U-shape. From that point I began giving my Screech Owl imitation, which I will proudly admit has become pretty convincing. Enough so that every small and medium sized bird in that area needed to come and check it out. Much to my delight after about ten-minutes of standing silently and calling every so often a real Screech Owl decided to call back. So there I was out in the middle of nowhere; me, marsh wrens, Wild Horse Creek, and a Screech Owl. Very peaceful, very pleasurable and forever entrenched in my memory.
Posted by Eric Beck at 11:10 PM