Report on the Boots, Buckets, and Chickens Weekend

Well at long last I am taking a little bit of time to get something posted to the blog for those of you who have been keeping an eye waiting for something new; my apologies, here it is, finally!

It has been a couple weeks since Oklahoma Important Bird Areas (IBA)took a first shot at getting some volunteer work acomplished, aimed at benifiting Oklahoma's first designated IBA The Selman Ranch, in Harper County, northwestern Oklahoma. The weekend started on Friday evening with most of the crowd arriving throughout the night, and me bringing up the rear at around 10pm. Fortunately Sue(Selman, ranch proprietor) and two fellows from Denmark put the blinds up earlier in the day, after a quick chat about birds and a descicion on the deaprture time, we were all off to bed. 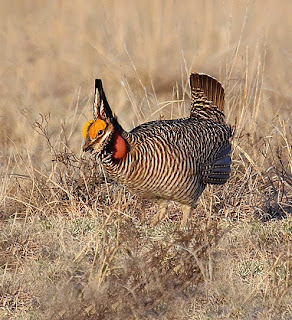 The early morning came quickly, especially if you bring a summer sleeping bag and the night is around fourty or so degrees, it tends to get kinda chilly at four in the morning. Everyone was up and blurry eyed at around 6'ish, some a little later than others, and by 6:30 we were on our way to the blinds at the Prairie Chicken lek. By 6:50 Dwayne Elmore and I were standing at the trucks waiting to hear the first sounds of booming on the lek. When they came, Dwayne went on his way intending to find more leks on the ranch, and I went on mine, bound for Laverne and fence marking material.


When I found my way back, the eight individuals who had been in the blinds were estatic, they had been treated to a wonderful show. A total of thirteen bird were on the lek, four of them female, and from the stories it was a rather active morning, including a visit from three species of raptor; a Prairie Falcon had been circling over head, a Northern Harrier buzzed them, and a Cooper's Hawk attempted to make one of the Prairie Chickens an early morning snack, it actually hit one of them! Everybody was shinning after that experience.

After a great brunch (cooked up by Sue), most everyone followed me to the salt flats at the convergence of Buffalo Creek and the Cimarron River. There we enjoyed extended looks at Snowy Plovers, Baird's, and Least Sandpipers, as well as an assortment of waterfowl, and a handful of other more common species. 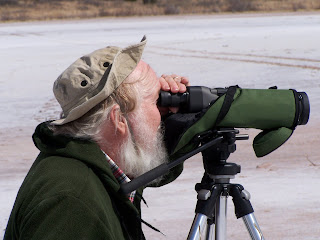 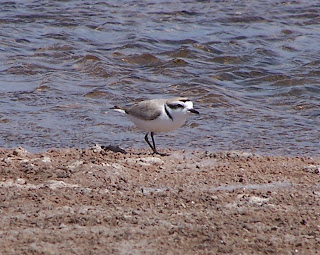 Following the short tour we moved back to the ranch were we presented Sue with an IBA plaque, and then followed it up with a short presentation by yours truly on fence marking for Lesser Prairie Chickens. We then split into two groups and proceeded to mark some fences for about two hours. I can't tell you how nice it was to see everyone enjoying themselves so much, by doing a little good for the birds. 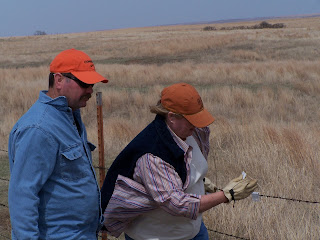 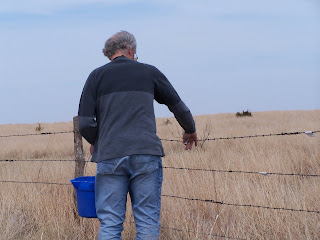 We finished marking fences, with a few grumbles because I hadn't anticiapted such enthusiasm, and failed to bring enough markers to satisfy everyone's taste for volunteer work! That said, we moved back to Sue's place for dinner, and a follow up presentation from Dr. Dwayne Elmore from OSU, on the ecology of the Lesser Prairie Chicken and it's habitat.

The following day was much of the same, people that had missed the lek visit Saturday were able to see them on Sunday morning, from what I understand it wasn't as thrilling of a show as Saturday had been. However, things were good enough for Steve Metz to get a few great shots of the birds from the blind (all LPCH photos in this post are from Steve). Another visit to the Salt Flats to pick up a Semipalmated Plover, as well as a bunch more of the same stuff from the previous day and that was pretty much it.

Thanks to all of the volunteers that made an effort to get out to western Oklahoma for this oppurtuntiy, also to Sue Selman for putting up with all of the crazy birders for the weekend, and everyone else that contributed to the whole experience. 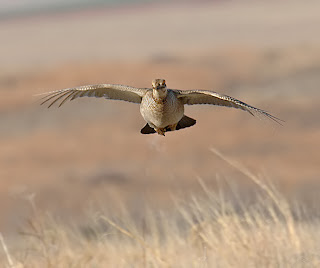 There is nothing like being on the lek with the prairie chicken early in the morning. I love their booming.

We have posted:
Alaska's Haul Road - The Dalton Highway.
A 414 mile gravel road,
to the Arctic Ocean

Come join us for the trip,
Troy and Martha