So this past week while I was surveying/camping at Fort Supply resevoir. Usually mid-day is my time to rest and sometimes bird. In this case I was checking out the local woodlands that surround the resevoir. I was walking the limits of the campground hoping for warblers, but mostly picking up orioles, waxwings, and lots more common stuff. Something I didn't expect to find were some rotting carcauses. Five to be exact. They were no more than a few feet from a campsite, just lying in some tall grass.

This was very perplexing to me. Who and what did it, was it human or did some lucky predators get into a group of turkey and have a field day. I'm leaning torwards the former. So in the interest of interesting comments and theories I have a few questions. 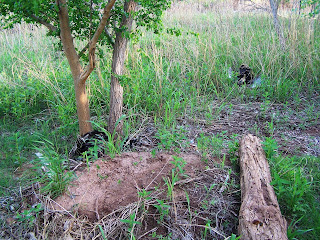 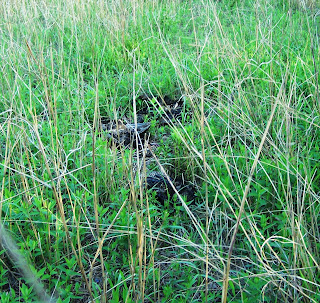 1) Look closely, is this the way turkey are normally field dressed? I mean you can actually make out the sternal keel in the photo on the bottom, on the center bird . Do hunters cut the meat off of the breast and leave the bone, in the field?
2) If this was a predator(s), the only individuals I can think of that could take down a turkey would be a Bobcat or some Coyotes. Could this be the case in this situation?
3) If this was a hunter(s), why leave the carcasses lying and rotting so close to the campsite? Talk about no respect for others.
4) Again, if these were game for someone it seems like a lot of waste. Isn't there something all of those feathers and parts could be used for?
If you'd like to comment either email me personally brdbrn1979@yahoo.com or maybe even comment on them on the listserve Okbirds. Just be mindful that we shouldn't try to offend anyone in our comments.
Posted by Eric Beck at 9:47 AM