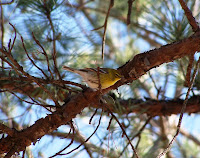 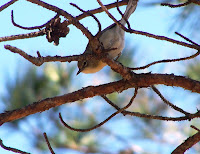 Monday was certainly a stupendous bird day. I haven't actually sat down to tally the total species count, but I found a few good rarities along the way. My day began before the sun, I spent the night at an in-laws place in Oklahoma City and left early in the morning hoping to beat the traffic, which I did. For some reason as I drove west Swans kept coming to mind. I guess the region had been getting some rain lately as most of the depressions were filled. I knew from past experiences that this was exactly the type of habitat that swans love to feed in. So as I cruized down the highway I made sure to take a good long glance at every water hole I could. A little past Hennesey along the south side of the road I found them. Three big white things! No, three great looking Tundra Swans. Two adults and a single immature bird. It took a while for me to ID them as they were off pretty far on the opposite side of the large impoundment, it wasn't until they moved closer that I could see their bill and head shapes. For a moment I caught a glimpse of what look liked a yellow lore on one of the individuals, but they remained just a little to distant for a positive on that specific marker.

Feeling confident with my somewhat grainy digiscope photos and positive ID I moved on. Canton resevoir was my next stop, I needed to get to my block before ten thirty so that I would have enough time to get a few hours on it and move on. The dam was my first and only stop at the resevoir. As I drove up I noticed a large gathering of waterfowl and gulls pretty far out on the lake (aprox 300+ yards), I could make out what most of them were but soon turned my attention to a single bird much closer and on its own. I threw the scope on it and low and behold a Western Grebe was looking back at me! What a surprise, this was truelly unexpected. I managed to get a couple really bad photos, but adequate for positive verification, and then moved on to my first block for the day.

A special interest species (SIS)is one that the Sutton Center requires a little more evidence when reporting for the atlas. Thus far I had found two and all before 10:15 am! My first block proved to hold another SIS species. For about three days Purple Finches had been alluding me visually, as if teasing me to say we are here but you don't know where! Finally I tracked a couple birds down that I had heard, they were all females and enjoying a feast of some kind of delicassy. It's always reasurring to hear a bird and feel confident that you know what it is and then to actually verify it's existence visually. Number three special interest species for the day.

On to my next block in time to knock it out and take advantage of the late evening owling possibilities. Doby Springs is fast becoming a favorite of mine in Northwestern Oklahoma. Just north of the springs I located 4 Lark Buntings which makes number 4 SIS. The actual Doby Springs park provided me with #5, a Marsh Wren, always fun to try and watch. A slight over oversight on my part, I drove out of my atlas block accidently and that little slip produced twenty five Lesser Prairie Chickens, #6. My final,and number 7 if you're counting,was a Short-eared Owl. I finished the block up at 6:30pm and made a mad dash for Laverne, trying to beat the closing time for the grocery store. I beat the closing time and picked up the owl in the process, it was floating over a tall grass field that was filled with about twenty Ring-necked pheasents, which I found after running into the field in hot pursuit of a photo (which I never obtained). What a way to end the day....I'll have to ask Dan but that might just be a record for the number of Special Interest Species in a sungle day.

Oh, the photos are both Pine Warbler from SE Oklahoma taken the day before my Superd Day. They have been the discussion on the OKbirds Listserve as of late.
Posted by Eric Beck at 11:02 PM

I like the changes you've made to your blog. You look like a real blogger now! Welcome aboard. You have a great site and I like how you show off the beauty of Oklahoma.

Also I forgot to menton 10,000 Birds. That's a site you should go too. Every two weeks they sponsor "I and the Bird" and you submit one of your favorite posts during that two weeks. You have so many great posts about birds. Google "I and the Bird" and submit a story for the next edition. They will love your photos and your stories and they have a big following.

Thanks for the complements Tim, I followed all of your suggestions hopefully a larger crowd will enjoy it now.