The Texas Society of Mammologists 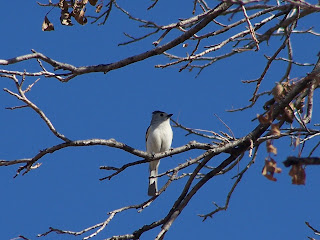 Well, I don't often make it down to Texas unless it's to visit friends in Wichita Falls. However, I was offered a chance to join my advisor and some other interested students from Cameron University in attending this meeting. I know, I know it was a mammology meeting, but science is science and there is always something to be gained in an atmosphere like the one presented at the Texas Tech Field Station in Junction. Yes, there were a few birds I was interested in seeing, so that just added to the excitement.

Our first stop on the road to Junction was at San Angelo, for which I already posted about. We continued onto Junction after our visit. No birding to be done when we got there, only a poster session and dinner. The poster session was interesting with lots of information about bats, rodents, and Hog Nosed Skunks. Really very interesting stuff. The remainder of the evening was spent behind a few cups of good Texas Shiner Bock as well as some scattered discussion about everything and nothing!
Fortunately the next morning we were able to get out and see a few good birds before the presentations begun. 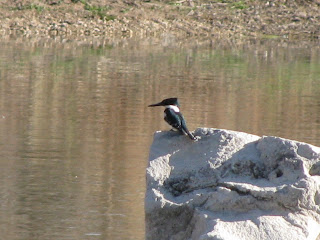 This Green Kingfisher was the highlight of the trip for me. For some reason I was really looking forward to seeing this bird. I mean it was a life bird so I was excited to get to learn it, but for some crazy reason that particuliar species has been on my mind for some time, I don't know why. Some other lifers for the trip were a couple Black-throated Sparrows, Verdin, Pyrrhuloxia, and a few singing Cactus Wren. Not bad for a mammology trip! Actually all of the species except the Green Kingfisher can be found in SW Oklahoma, minus the Black-throated Sparrow which can be found at the Black Mesa in Cimarron County (also in Oklahoma). Our count for the trip was either 89 or 90, not bad considering we are currently in that lag time between winter, and the spring migration.There are only slight differences between SW Oklahoma and the west-central Texas area, they have alot more scrub/mesquite habitat, in SW Oklahoma we have a bit of a smathering of habitats which happen to include a little scrub/mesquite.

Great bird photos and blog. I was a grad student at OU a few years ago under Jeff Kelly. Who will you be working with?

Most likely Michael Patten, but I imagine inadvertanly with Jeff as well.