Even though I am out concentrating efforts on marshbirds (bitterns and rails, ect.), I do take note of other birds that I see while I'm out, and I picked up a few good species while out there. Take these two Willets 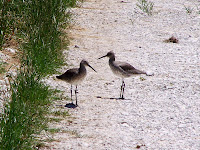 (photo directly left) that were hanging around on Sunday, they spent most of the day on the Otter Lake levee. Another interesting species on Otter Lake were the Neotropical Cormorants. Its always fun to see a species like this, you get nearly sick of seeing there cousins the Double-crested Cormorant, so getting some good looks at three individuals of the former species is always fun. Even better getting to see both species together, which provided a nice photo as well as a good chance to compare the two (the smaller bird on the right is the Neotropic). 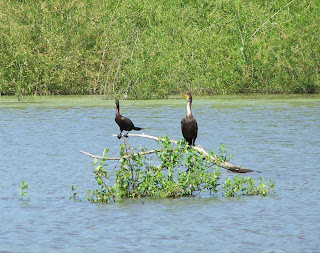 I suppose I should mention the marshbirds, since that was my purpose for the trip. Lets
just say there were plenty to go around. Least Bitterns are pleantiful there, and if you need this bird for your life list this is the place to pick them up. I had over twenty throughout my four day stay. Most of them I heard, but I did get to see about eight or so, either cruising low over the marsh, or making a quick exit when I spooked one. This is by far the most I have seen anywhere. I didn't really look for a nest, I will probably do that the net time I visit. A few other species were the American Bitterns, a couple of Soras, and the pair of Virginia Rails that I mentioned in my last post.
As mentioned before there were also Common Moorhens around (photo on the right). What I f orgot to mention were the Purple Gallinules, which already have a nest which David A. had located well before my arrival. This is the only place in the state where this bird is known to occur, I think it's likely that there a marshes that are close to the slough that probably hold a few individuals, but these are all on private property. I wish I
had a good photo of these guys, I'll have to work on that, they really are in impressive species.
So it was a really great trip, I picked up a couple Oklahoma birds including Olive-sided Flycatcher, and Willow Flycatchers. I will be heading back there in a couple weeks and will have to find some nests and try to get better photos, to share with everyone. So until the next time....talk to ya' later.
Oh, don't forget you can click on the pictures for a larger view!
Posted by Eric Beck at 10:01 AM