School Is Out and Birds Are In

I can't begin to express the sense of relief I am fealing. The 2 1/2 month long summer break is here. I don't have to worry about classwork, and I only have to concentrate on two things! My family and the marshbird project! Oh the beauty of it. We have started getting our new garden in shape on the south side of the house, and I've been working on the brick walkway. We have had the house for a year, and things are finally getting settled enough that we are getting to do some gardening.

Perhaps the most exciting thing about getting to work in the garden (besides the stress relief factors), is the chance to see the spring migrants come through, or watch the residents dig through the freshly tilled soil. The American Robins are especially tame, and don't mind dropping in while I'm still in working only a few feet away. A few of my better yardbirds this year thus far would be the Catbirds, Warbling Vireo, Yellow Warbler, Great Crested Flycatcher, and the Western Kingbirds that have come back to take advantage of the bee-hive in our yard.

I am going to do my best to get a few videos of these guys catching bees. It would be very interesting to find out what there success rate was. From what I've seen it's probably pretty high. Unfortunately the little buggers aren't nesting in my yard. I think they live across the street. Speaking of not nesting in my yard, I do know of a few nesting birds in the neighborhood.

Take for instance a pair of Yellow-cowned Night Herons nesting in my friends backyard. This is the second year in a row and it's probable that these are the same pair from last year. In fact there were a couple other birds gathering early in the breeding season and I suspect it could have been some of last years young. Pure speculation. So I've taken a few photos and I thought I might keep track throughout the summer and see how things progress. 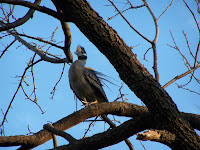 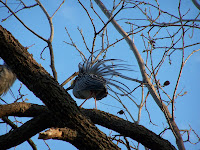 These first few photos were taken on 8 April 2008. The two individuals were in the midst of a lackadasik round of struttin'. I was only able to get a few decent shots of the head and back plumage, only for the reason that they would put on a show for very brief periods.

One good thing about taking photos around sunset is that every once in a while you catch some realy pretty light. Which is what the next picture is in the post for, I love the pink hues that the sunset added to this shot, and it helped that the bird was posed pretty nicely. Not only a good photo oppurtunity but it just so happened that this particuliar evening I was fortunate enough to catch their copulatory routine as well. How exciting, right? 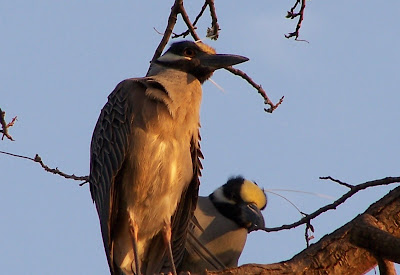 After the excitement the male bird dozed off, which speaks highly for most male vertabrates. My friends and I had a pretty good laugh after that. The next time that I made it over to my buddies, they had finished their nest and had begun to lay eggs. I picked up half of a shell that had fallen out of the tree before the nest was finished. This nest photo, which isn't that great was taken on the 23rd of April, same day of the egg. 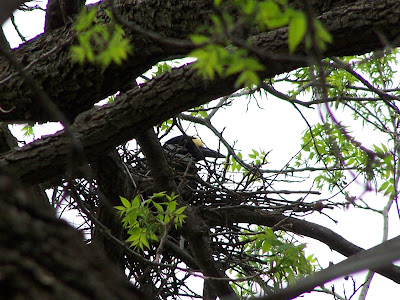 I'll be keeping my eye on the couple and the outcome of their nesting attempt. I am also going to check some of my resources to see if this is in fact a first nesting attempt for the county (probably not). That's it for now!
Posted by Eric Beck at 9:57 AM