A quest for the Pine Woods Sparrow! 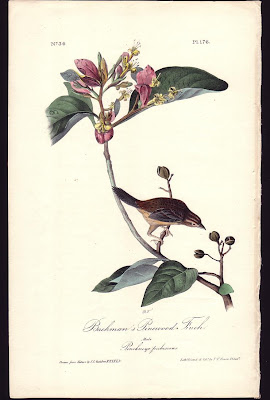 On a quest for the elusive Bachman's Sparrow and unknown populations of this Audubon Red list species. I arrived late in the afternoon on Wednesday of last week, Tim Ryan had already arrived and was patiently waiting to hit the field, set-up camp and just get moving. It didn't take long before the tent was up, and we were off for a little bit of scouting. By the time that was over I think we were both pretty worn out, enough so I couldn't even begin to muster the energy to get my guitar out and pluck a few chords like I had promised; it would have to wait until the next evening.
Up and out early in the morning, we spent all day Thursday checking recently thinned and disturbed stands of mature pine for any sign of the species. For most of the day we had no luck. Driving miles and miles of beautiful National Forest roads is not such a bad thing, even if you are not locating the species you were looking for. We had ample opportunity to take in all that the Ouachita National Forest had to offer and at given times, when we would find seemingly decent habitat, we would stomp around and give the area a good search. No Bachman's to be found, but let me assure there was plenty of flora and fauna about and I've provided a few of the photos that go along with the journey. My wife and I (but mostly my wife since I'm not home much) has been building a nice little garden of wildflowers and herbs around the house, and I have been paying attention to those a bit more when I'm out in the field; I'm always looking for some new beauty to add to the collection at home. Of course I relocate the same species along the highway and gather seed stock from there. Why? Because it is illegal to harvest anything from a National Forest without the proper permit, which I do not posses. In order to figure out exactly what it is, I have been taking photos and making sure to take good notes and label any samples that hop in the truck with me from the road side. 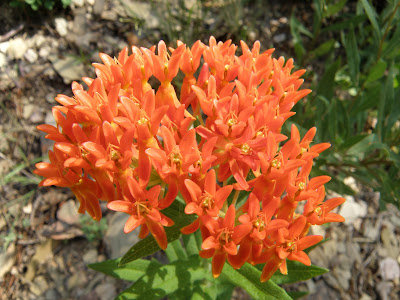 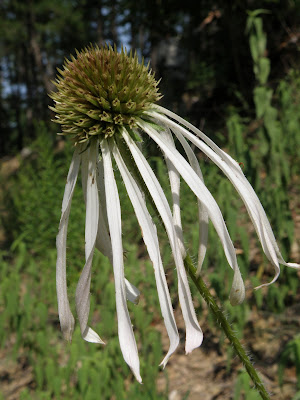 Late Thursday afternoon we hit the jackpot. After having struck out all day and getting turned around on the seemingly endless National Forest roads, we found ourselves in some particularly good habitat. I remember saying out loud, "now this looks like exactly where a Bachman's Sparrow would want to be." About ten minutes later, we heard it; I gave Tim a wide eyed look and he said "what do we do now?" Stumbling for my gear and moving as quickly as possible to get myself out of the truck, I responded, "we chase it!" And off we went down through the woods. Five minutes later I was on a sparrow, a few minutes after that we kicked another out of the grass accidentally (no, not literally!). All of the sudden, as if they detected our excitement, numerous birds started calling in close vicinity. I estimated no less than four calling individuals in the general area. A very exciting ending to an extremely hot and long day!
I decided to return to the same location Friday morning, but not after Tim got to finally hear me play a few tunes around the campfire on Thursday evening, after a celebratory Shiner! He also insisted on taking video of the whole experience which he later threw into a nice little edited highlight reel, which I have thrown in here just for the fun of it; just don't expect all that much! We returned Friday morning to the same area from the afternoon before. I wanted to check the entire location and get a better handle on the number of Bachman's present, no such luck though. There was a dense fog well into the late morning and the birds were not calling, moving or making themselves known. We ended up mapping the roads and checking around the peripheral areas for more potentially suitable spots. Finding ourselves at the lake at one moment, we took a few minutes to snap some photographs of the foggy situation. 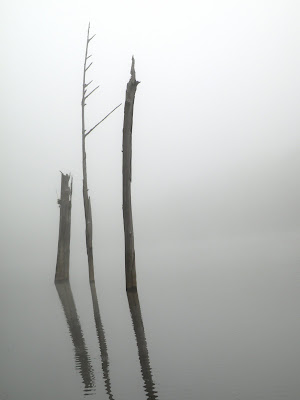 Birds, birds what about the birds? Well, the resident warblers were out and making themselves very apparent (wish I could say the same for the Bachman's Sparrows), Black & White, Kentucky, Common Yellowthroat, Pine and Prairies as well. I was pretty surprised at the number of Prairie Warblers we actually heard and observed, far more than I had expected. Yellow-breasted Chats were out making their ruckus as well. We had an exciting moment with a pair of Scarlet Tanagers, it had been at least five years since I had last heard the chekkk-brrrr call of the male. It filled my mind with memories of NW Massachusetts in the spring; a nice way to bring back fond memories! We ran into two Broad-winged Hawks throughout the couple days Tim was with me, unfortunately no photos to go along with it. Hmm, let's see, of course we had a number of Brown-headed Nuthatches and lots and lots of the other smaller but much more common species like Carolina Chickadees, wrens, Tufted Titmice, ect, ect, ect. . . There is far more to talk about, having spent seven days out in it so I think that will warrant a part II.
Posted by Eric Beck at 5:14 PM

It sounds like a very successful chase Eric! To hunt down a shy and secretive bird like the Bachman's Sparrow must have been very satisfying. I'm always amazed at how much your luck can change from day to day when birding. Several birds one day, none to be found in the same place the very next day. Happens to me all the time. What's up with that?