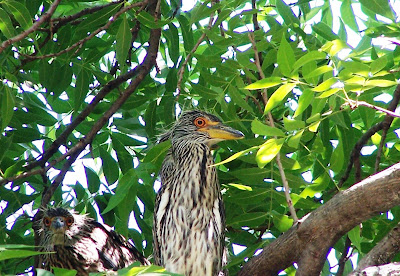 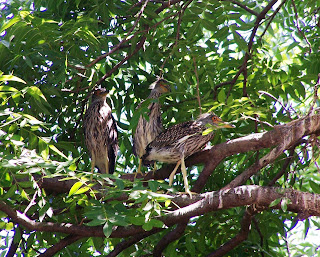 No these guys aren't blue herons, they're Blues Herons. Why you ask, well they live in the backyard of some longtime friends of mine. Danny and Felicia Dupree. Some folks from the Lawton Area may have heard of Danny's band the Brothers Dupree, a get down and dirty blues/jazz band. Honestly these guys are by far the best blues/jazz group that I have heard in Oklahoma. Actually I've seen a fair amount of blues shows, mostly on the east coast, these guys would definitely be tops over there as well!
Just as I mentioned a few weeks ago, when I took photos of the adults, this is the second time they have nested in the Dupree's backyard. Come to find out it is most likely the third. Yellow-crowned Night Herons typically prefer shady swamps or forested areas near water ( finally got to use this photo from three years ago!) 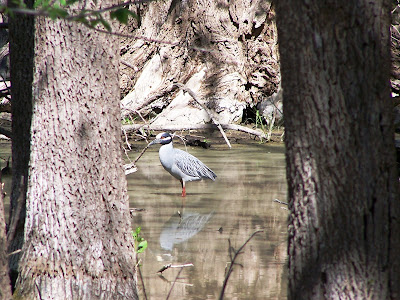 , I suppose an older portion of town with mature trees and a decent amount of shade works as well. This particular family of heron is nesting about thirty five to forty feet high in a Pecan Tree. They chose the exact same branch to nest as they did last year, fortunately in plain view which allows for decent photo opportunities. There is also a second nest positioned just above and about fifteen feet to the right of the active nest. Until recently everyone thought it had been abandoned, but just a few days ago we noticed new vegetation in it and a couple of eggs that had fallen out of the nest and had landed on the ground just below. 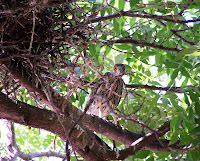 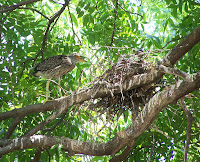 The five young of varying ages are all very active, and walk about the large branches. The more mature ones of the group usually venture a little further and forage along the main branches. Upon close investigation using a field scope it looked as though all primary feathers on the more mature birds were complete, and correspondingly these individuals are constantly flapping and stretching, probably working up to the moment of their first flight (hope I'm there). Well that's it for now, I'll keep everyone informed of how things turn out and hey, if you're in Lawton on a good weekend you should look for the Brothers Dupree they won't disappoint! 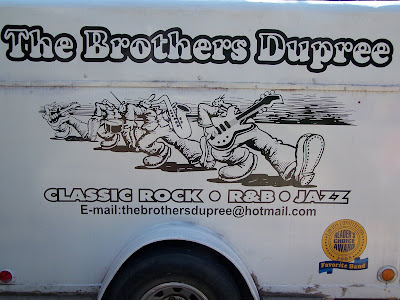