My surveys for the Slough didn't really begin until Monday (9th) morning, and then they were abruptly held up by torrential downpours in the evening. The totals in Broken Bow were 3+; I think the Red Slough got a little over an inch. Beck base camp was nearly torn to shreds by high winds. Even though my tent is pretty much expedition weight, it was only tied down with a few strings; had it been on the ground, I would have been alright. The winds were able to get under the floor and nearly turn it into a kite. Had David A. not had his knife handy, I would probably still be picking up the pieces in the marsh! Needless to say I spent the night at the Microtel in Broken Bow. A friend made a comment about hippies never sleeping in hotels, I feel good in saying this was a first in two field seasons of marshbird surveys. I mean I even got to take a shower, no late night dips in the slough for me.

After a good night's sleep, I hit the Slough Tuesday morning for a survey route that runs past Bittern Lake on the north side. My first broadcast point held three King Rails, the second point three more (and I could still hear the others from the last point); the remaining points produced Purple Gallinules, Common Moorehens, four American Bitterns, and a handful of Least Bitterns (click on the picture below and try to find the Least Bittern that is hidden!). 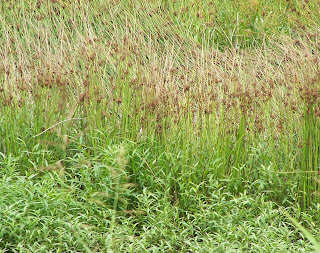 It's not easy keeping track of all those birds in such a small area, trying to make sure you don't count the same bird twice, and deciding whether or not the American Bitttern that flew past you is the same from five minutes ago, possibly returning to or from the nest with some goodies for its little ones.
After the route I headed over to another location to check on some Virginia Rails that I had located on the previous visit. I had two associating adults, unfortunately I wasn't able to locate them again. Although I feel pretty confident that these guys bred at the Slough, I will probably have to wait another season before I get some solid evidence like a nest. But you never know, maybe we will see some young down there this year. After the check-up, I headed to Pintail lake for a lengthy (and tiring) session of nest searching. My goal was to map as many nests, and get egg counts when possible, for the entire lake. 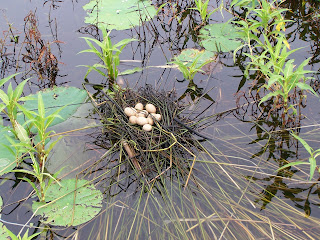 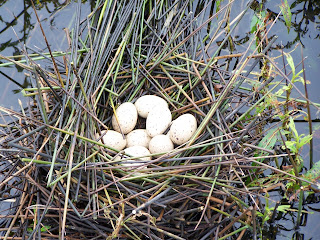 Four hours later, and multiple trips back and forth across the lake, produced a total of four nests. Three with eggs and one which I came across while the female was building it. She was just getting to the point where the nest was starting to rise out of the water. The three active nests held 12, 10, and 9 eggs respectively, all of which were Common Moorehens. Only a single active nest for Pied-billed Grebe was located, unlike when I checked the lake two weeks prior, where only four grebe nests were found.
Pintail Lake is shaped much like a square; so in order to cover as much of the lake as possible, I criss-crossed its entire length. Not not just once, but enough times to exhaust myself. I tried to keep the intervals at aproximately 75 Meters, anything past that and I couldn't feel comfortable with saying that I found more nests than I missed. There are a few locations in the interior portion of the lake where I can't really get to in my canoe; there are so many downed trees and large, live willows that I end up getting pinned in, and waste lots of time retracing my steps. I have yet to find any nests in this portion of the lake, and that includes Pied-billed Grebes. David Arbour and I spoke about this a little, and we both suspect that close proximatey to trees and perching sites allows for higher predation rates (pure speculation of course).
Upon returning to my truck, I found a yellow slip of paper wedged into the door, surely not a ticket? No, a note from David asking me to check out a nest that Herschel Raney and he had located. His description was: two small white eggs, unmarked, postitioned in a willow treee about a foot off of the water. Instantly Least Bittern came to mind, I quickly hopped in the truck and drove to the location of the nest. As soon as I approached, a female Least Bittern flew out of the nest. I was right! 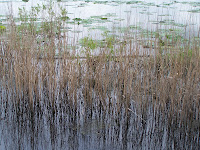 I waded out about waste deep and took a few photos of the nest (yes, there 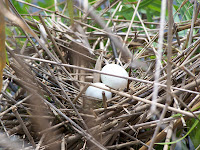 is a nest in the photo on the left), and while I was there the female came flying around again only about ten feet from my head! How exciting! A few minutes later, I left the nest and then located a male foraging along the edge of a large patch of rushes (which is the bird in the first photo, if you can find him!). Soon after the excitement, I met up with David and Herschel and then proceeded to go to Pappa Poblano's for a nice late lunch/early dinner with David. Five hours later I was home, cleaning the kitchen and putting my girls to sleep, whew what a day!
*****One note this is all part of a research project I am working on, please do not try to relocate any of these nests that are mentioned in this blog. When I'm out I do my best to keep from disturbing the birds as much as possible, please practice restraint.....! Not that I think anyone would actually do such a thing.******