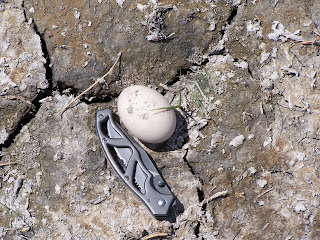 This egg was one of three, all of which were likely from the same species. They measured 46-48 mm, were off white to buff white in color, non-glossy, and had no speckling of any sort. Duck species that were present were Redhead, Northern Shoveler, Mallard, Blue-winged and Green-winged Teal, also present was an Eared Grebe. I am leaning torwards Blue-winged. I also suspect that they are infertile, which may explain them being layed randomly along the mudflat in three distant locations, with no nest in sight. Interesting, feel free to leave some remarks or comments. Good Luck!
Posted by Eric Beck at 12:05 AM