Quick trip to the Wichita's 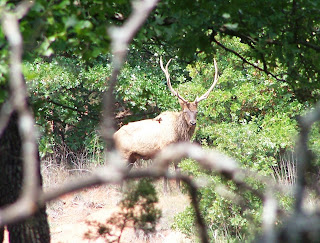 After an exam yesterday in Zoology, the first of the year for me, I decided to make a break for some calm and quiet. I walked Burma road in the Wichita Mountain National Wildlife Refuge in hopes of finding some migrants, unfortunately there were none to be found. I still had a good time though. I came up with three Black-capped Vireo's still on territory and calling. This caught me by surprise because I had figured they were out of here by now. When I got home I checked the late date in Jack Tyler's (2005) book and found that the 20th of September was the latest report for them, but the average late date he reports is the 9th of September. So I remained satisfied with naming them the birds of the day. The remainder of birds were mostly summer breeders still hanging about. The butterflies were really out and about and I came up with a few species, I'm still just learning these guys so I missed more than I identified. It was overcast and temperatures were mild, elk were bugling all over, it was nice day to be out.
The Birds
Red-bellied Woodpecker, Carolina Wren, Pied-billed Grebe,
Red-tailed Hawk, Bewick's Wren, Killdeer,
White-eyed Vireo, Black-capped Vireo, White-breasted Nuthatch,
Blue-gray Gnatcatcher, Tufted Titmouse,
Carolina Chickadee, Rock Wren,
Northern Cardinal, Canyon Wren,
Downy Woodpecker, Great Blue Heron,
Wood Duck, Red-headed Woodpecker,
Barred Owl, Canada Goose,