Well it sounds like everyone in the Oklahoma birding community did well this weekend. Multiple people paid visits to the White-tailed Kite in Lawton. Sounds like the usual assortment of loons are present at Tenkiller Lake, including Oklahoma's second Yellow-billed Loon for the season; and don't forget the Pacifics in Stillwater. Fortunately I can add a little bit more excitement to the weekend.
Saturday afternoon I made it to Canton Lake just around 4:15 pm, which gave me plenty of time to check the gulls and ducks that were feeding pretty closely to the dam. After about fifteen minutes I located a 1st year Thayer's Gull, in a light plumage. Unfortunately no photo, but I did have lengthy looks at it from about75 yards and took down many notes. But just before the gull I forget to mention that there was a Rock Wren along the dam, just above the boat ramp along the west side of the parking lot (if you're following me!). I did get a photo of this guy, only one and I'm not happy with it at all.
I chased gulls for about 45 minutes along the dam, and then headed north along the west side of the reservoir, making stops every chance I could hoping to find a new gull or something fun. Patience paid off and a Townsend's Solitaire flew beside the truck. I chased this bird around for about ten minutes before it finally gave me a chance to try and photograph it. Take a look, can you see the white eye ring and the white-outer retrices? I can, but not easily! 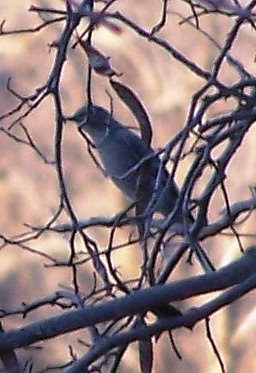 I couldn't have asked for a better time,
throw around 4K Common Mergansers and a smattering of other common waterfowl and I call it class A birding. I still haven't solved the problem with birds being too far out on the lake, I'm not even sure a boat would help; they are especially weary about boats and humans and move off a good distance if approached. I moved on north and west to Woodward.
Sunday was spent primarily at the Selman Ranch IBA. I did make a short trip to Ft. Supply Lake but never found anything there. It was especially quite, that is until the fire sirens. Apparently a prairie fire north of Ft Supply needed tending to. By the time I made it to the top of the hill on the west side of the spillway, the sky was filled with smoke. Later I heard that the fire burnt a swath 3x5 miles large. You could see the smoke from at least a county away! 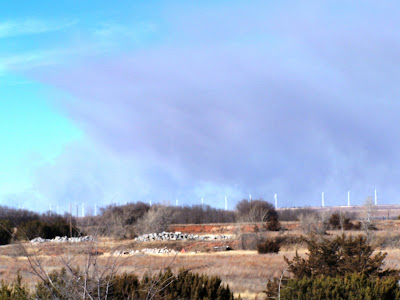 Later that day and evening at the Selman Ranch I would come across a a few more species including Northern Bobwhites, dark phased Red-tailed Hawk, and finally a single Lesser Prairie Chicken (mind you that's not the whole list!). That made the day for me! As much time as I spend in the region I still don't expect to see Prairie Chickens, and when I do its very exciting.
Today was also spent at the Selman Ranch it was beautiful and relatively quiet. Along the Cimarron and Buffalo Creek Salt Flats I located three Greater Yellowlegs. Apparently this winter has been mild enough that many have decided to hang about. I've heard that many were reported this year on CBC's around the state. A handful of Loggerhead Shrikes were waiting about for unsuspecting American Tree , White-crowned, Field, 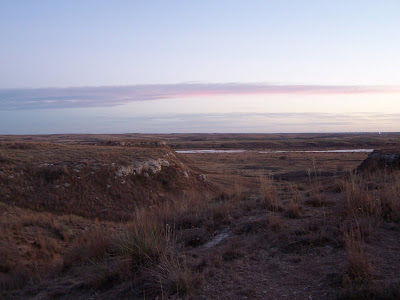 and Song Sparrows, or maybe something a little bigger...apparently they take Cardinals in Northeast Oklahoma! I left the Selman Ranch around three thirty and finished up the count there with a Ferruginous Hawk.
Back to Canton and Gulls! I made it back to the dam about 4:30 again... The gulls were feeding along the dam with the large group of Common Mergansers again. There were 5 Bald Eagles in the mix, two adults. I located a Thayer's again, I'm inclined to think it was the same individual. Shortly there after I found a 1st year Glaucous Gull and got the photos this time. There are loads of gulls on the lake, equal amounts Herring and Ring-billed it seemed. I wouldn't hesitate to have the notion that there's probably a whole lot that I missed! 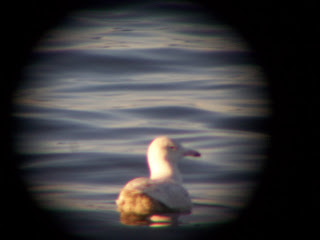 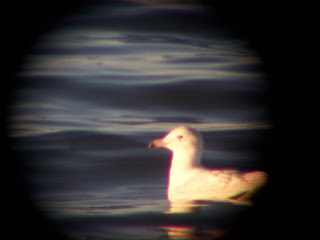