Success finally! After five pursuits and many hours of searching I was able to locate the White-tailed Kite (Elanus luecurus) that has been reported since early December '08, just SW of the Wichita Mountain National Wildlife Refuge. 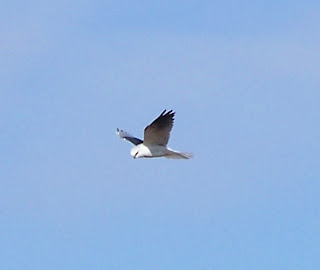 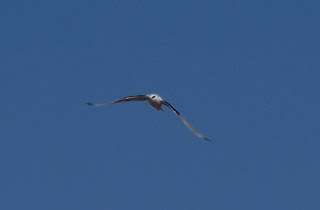 Let me ask? Is it excusable for a student of Ornithology to chase birds between classes. I say yes, and especially this superb and photogenic individual. I located it NW of the corner of 267th and NW Carlson, on the 16th of January. This is reasonably close to the locations it has been spotted before. I was able to watch it from varying distances, and on one occasion only 15 yards! I was also able to get some identifiable shots, but someone with a real camera could have done considerably better. The bird stayed in the viewable area for approximately 30 minutes.
It's hunting style was very interesting to watch. My description of it would be a hovering/swooping action. Fortunately for me it got closer with every swoop. I did observe it perched as well, but far off on both occasions.
This is species is considered a rare migrant and winter visitor (Tyler, 2005). I've lived in Lawton for 5 years and this is the first in the state that I have seen. I added it to both my life (?, haven't bothered to tally it yet) and state list (319).

Oh yeah #318 for the state was four Trumpeter Swans in NE Comanche County. It looks as though there are still two life birds hanging around Oklahoma though, according to reports. The Yellow-billed Loon and White-wing Crossbills are only an hour a way.......hmmmm. Stay tuned they'll be some more to come from NW Oklahoma later this weekend.


Oh the Red-shouldered Hawk was one that I found while searching for the kite. The western distribution of these birds has been a thread on the Oklahoma bird listserve for a while now, so I thought some might be interested. Not a great shot though! 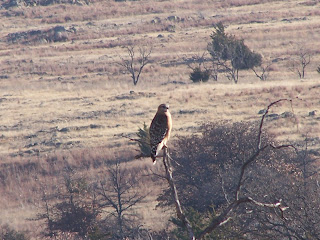