My Deal with Gulls 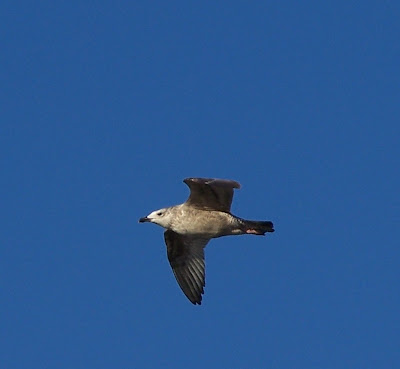 I think coming to realize that I know absolutely squat about gulls may end up helping me with gull ID in the long run. Take for instance the other day and my visit to Lake Hefner in Oklahoma City. I'm still very unfamiliar with this lake. I spend my time predominately in the South and the Western regions of Oklahoma, and when I visit Hefner I spend a great deal of time trying to orient myself to the best locations. That said, my city driving skills aren't great, and I always seem to place myself on a street that has a detour and only runs one way!

I've had moderate success with gulls and terns in the state, and have managed to rack up thirteen species in the past 5 years, most of those on my own. I think I dropped in on Berlin Heck's Lesser Black-backed Gull a couple of years ago at Hefner but that's it. My personal best two would be a Sabine's Gull at Lake Lawtonka in 2006, and last year's Mew Gull at the Kerr Reservoir Lock and Dam (Beck et al. 2008 ). It's difficult to be patient enough to stand in the cold, while picking through a few thousand individual birds in a huge swirling mass. Hoping to find that one single (sometimes more) rare or accidental species. But when I find one, it makes me feel like jumping and shouting, which I have been known to do. Chance and luck give to patience, and numbers of individuals present (or at least that's the way I see it).

Here's my problem (confession if you will). Sometimes during gull ID sessions, my mind ends up giving in to confusion. That's usually when I take a break and go looking for something else. Here are some examples of this confusion of which I speak: is the mantle on that bird darker than the rest, or is it light and shadow playing with my perception of the gull? How old is the bird that I am looking at, 1st year, 2nd, adult, what... ? What about the bill size, shape, colors, rings, gonys spots, long, short? Aaaghhh! I'm sure many of you may feel the same. I don't normally give to looking at the guide right away; it always seems that the moment you look at the book the bird is gone. My mantra, "be patient and look at the bird." I take notes and do my best to get a clear photo. Some of which you all have endured! That's it.

So to Hefner, and my half an hour chase of what I presume to be a Herring Gull of interest (Larus agentatus sp.). There may be a chance that it was a hybrid, although Howell and Dunn (2007) noted that it's "generally rare" to find them, although it doesn't seem that its too uncommon of an event, especially in western North America. There may also be a chance, most likely, that it's just a regular run of the mill Larus a. smithsonianus, perhaps displaying some of the variablility that this species is notorious for. Either way it was a fun 30 minutes and also a chance for me to knock out an assignment for Ornithology. The assignment: in our field journals for the semester, write fifteen species accounts. Guess what my first is. You get to come along for the ride! I've gone into a little more detail than we need for the assignment ( I think!), but I could use the practice. Not failing to forget that understanding the more common species such as Herring will help with identification of the more obscure gulls in the state, especially the large white-headed gulls.

The individual gull was initially seen approximately 125 meters off of the levee. The gull was at rest on the relatively calm water. Because of the proximity of the area to the levee the water was shielded from the wind. Waves were not a problem on this side of the lake, and allowed for more relaxed viewing than further south on the water. Ring-billed (45 indiv.)and Herring Gulls (15+) were present along the two and a half miles of the levee road. Most birds were observed cruising low (around thirty-fourty feet) and at varying distances, but in close proximity to the levee. This made for easy observation of individuals on the wing. Some individuals would cruise past and then circle back again a couple hundred meters, and then proceed to follow the same general eastward path they were originally on. On occasion, birds would dive and capture fish of an unknown species.

The individual Herring Gull that this account is based upon stood out to me for a number of reasons. The first observation, and what drew me to this particular individual, was how much darker the mantle appeared to be from other adult Herring Gulls in the same general vicinity, a full shade darker. I did take the time to watch its activities to be sure that the shading of the mantle was not due to light conditions. Numerous times, both on the wing and at rest, the bird was seen next to or very near other individuals of the same species, and approximately 80% of the time I felt sure that the dark mantle tone was in fact true and not due to conditions. Although the photo is poor (150 meters, bad light conditions) , you can see a generally darker mantle in the individual to the left, both birds are Herring Gulls .
Other field marks that were noted for this particular individual included a large bill with a red subterminal spot, a pale eye, and typical (but dark) mottling from the top of the breast around the nape and over the rest of the head, all of which are key identification points for Herring Gull (Howell and Dunn 2007, Pierotti and Good 1994). The bird appeared slightly larger than many of the other Herring Gulls present. Maybe this could be due to the fact that male individuals are usually larger than females in Larus species ( Howell and Dunn 2007).

White "windows" were visible on Primaries 9 and 10. The remaining primaries were tipped with white, as well as the secondaries. Unfortunately I never got a great look at just the scapulars, but from a photo not posted here, they look to be typical for Herring. Underparts where pale, including the under-wing, and the gull had the pink legs typical of this species. 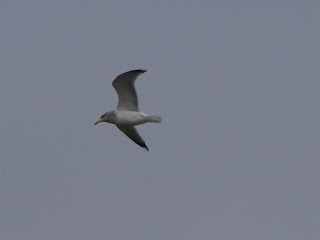 So what was gained from this little adventure into the Herring Gull? 1: I realized that I have a very long way to go with gull identification. 2: From reading some ID books and species accounts I don't feel so bad about getting things a little confused at times, gulls may in fact be some of the most difficult species to identify (at least for me). 3: Work on the common birds and understand all of their characterisitics, that way the unusual characterisitics stand out.


Some of the other species seen while at Hefner included Red-breasted Merganser, Common Loon, 97 Common Goldeneye, A smattering of Horned, and Pied-billed Grebes, and a few more common waterbirds.