What They Didn't Show Us at the Oklahoma Wind Energy Conference

Keeping to my statement that I had planned to continue working on topics concerning the Lesser Prairie Chicken, I decided to tackle something I have been thinking about since the Oklahoma Wind Energy Conference in December. During the conference there were a number of presenters, but the few that I am thinking about showed the crowd slides of a few different maps. We had an example of the Oklahoma Lesser Prairie-Chicken Spatial Planning Tool , which if you don't use the link I provided you can find buried deep in the vaults of ODWC's web page. I've provided a little example of this tool that was developed through a pretty significant partnership between a number of NGO's and State and Federal level entities; it was developed so that planners/developers like Southwest Power Pool could use it to avoid the areas with the most significant habitat and accordingly significant local populations. Let me remind you though, unlike Wyoming, Oklahoma is relying on a volunteer-based approach to doing the right thing. The developers and planners can simply ignore this map if they like. No regulations here; just do whatever you please! Well........ 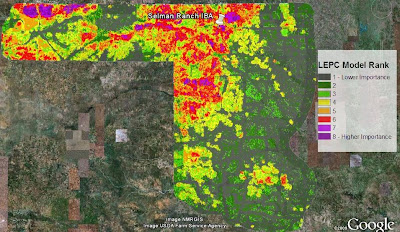 So what am I getting at? Well, we were also able to view a number of other maps. These were from Southwest Power Pool and a couple of other planning/developing agencies. What bothered me was the fact that I've seen these maps a number of times, but what I haven't seen is anyone actually combining them. You know, the spatial planning tool for LPCH's and the wind farm/transmission line maps all on one page together. I thought about it a bit, and you know, why would they? They don't want the 1,000 people sitting at the conference to see just how carved up this population was going to become. Well I've taken some time to use the google earth habitat tool from above and a slide from one of Southwest Power Pool's presentations, and I've done just that. 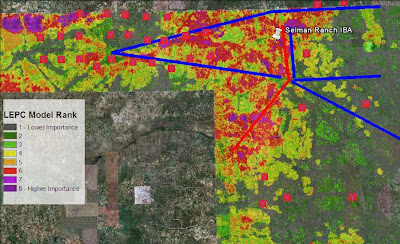 So here it is for everyone to see. It is obvious what the little red boxes represent, wind farms (planned and constructed); the red and blue lines represent high voltage transmission lines (planned and constructed). Now, you tell me how a declining population of North American endemic grouse is going to survive the likes of this kind of development? Let's not forget the Lesser Prairie Chicken isn't far from the USFWS's threatened and endangered list. Sure it's only on the "warranted but precluded" list but let's think about what that means, because I don't think people really get it. To me it means yes, this species needs to be listed but there are a few other higher priority species at the moment and we just don't have enough money to spread around everywhere.....that is unless we elect another Teddy R. I think hell will freeze over before that happens, but oh wait, didn't the Saints just make it to the big dance? . . . maybe it could happen!
I'll say it again and I'll keep saying it. Responsible planning, responsible development, responsible construction, responsible maintenance, over and over again until the people that are in control of this situation start making the right decisions........ 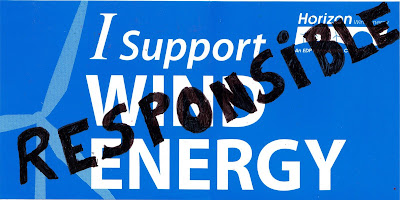 
Disclaimer: The second map was something I created using a power point presentation prepared by Southwest Power Pool. I did not steal this image, I simply created it using their slide for an example. There was an important disclaimer at the bottom of the slide which stated: "Please note in the legend (not included in my version) that some wind farms are under construction and have not been committed to yet". I think the same can be said for the transmission lines you also see, although I couldn't find that disclaimer on the slide.
Posted by Eric Beck at 8:55 PM

I am not happy with the quality of these images, my apologies. I am waiting for a response from blogger.com to try and figure out why these images will not allow you to click and enlarge them.

Do you have any supporting evidence to back up your claim that these power lines and windturbine installations will negatively impact the whole species? It seems that these proposed sights and power lines are only impacting a very small percentage of the entire available habitat. The corridor necessary for a powerline is pretty narrow and while unsightly it is pretty benign. Come back to this issue with a masters degree.

Well that was certainly a nice way to approach a civil conversation. If the birds had the time for me to pursue a Master's degree maybe I would. Be that as it may, and thanks for taking a look at the blog, the published domcumentation for research about prairie chicken avoidance is out there. Maybe I will address that in an upcoming post, but for now here is something to look at "Pruett CL, Patten MA, Wolfe DH (2009) Avoidance behavior by prairie grouse: Implications for wind energy development. Conservation Biology. 23:1253-1259."

One other thing, its easy to come on here and make biting comments like the one you threw my way when you hide behind an ananymous persona. Next time why not stand up for what you are saying, and let me know who is talking.

I suspect the only reason you didn't is either the fact that you know all of this to be true and are trying to take a pop shot for fun, or you are part of the development side of things and stand to make money off of all of this. But really I only hear hot air. Try again sometime and be a human and put your name up so I know who to address it to!

Nothing about my last post was negative at all Eric. Why are you being so defensive? I merely posed some obvious questions that ought to be addressed. I think that your work is important and that the discussion on wind power development and the ramifications thereof vis a vis grouse habitat are worthy of a masters thesis. What in the world is "biting" about that? Keep up the good work. I am remaining anonymous for personal reasons. Forgive me but my personal identity is irrelevant to this discussion as ego has nothing to do with my input on it. That said could you address the question concerning the degree of impact? I read the article you mentioned and looking at the natural distribution of habitat and populations. I am seeing that they seem quite fragmented independently of the proposed wind energy development. This leads me back to my original question. Additionally the article made some assertions that were kind of a stretch in my opinion thus the request for imperical data. The samples offered seemed too small and localized to be statistically relevant. BTW I will deliver a 12 pack of your favorite if you can guess who this is.

Anonymous,
Thanks for the very good questions. I've decided that I will address these issues in a new post about avoidance.This question has come up before during discussions with others and I believe I recall someone making a similiar statement about the lack of support for this notion at the Wind Energy Conference in December.

Now about the "come back to this issue with a masters" comment. I'm not sure how a comment like that from a person that I obviously know is supposed to be taken. Because everyone I have spoken with gathered the same potency from it. I'm just gonna forget about it. I know that I have as much field time under my belt as most masters students graduate with. I also know that I already have a number of peer reviewed articles, although admittedly they are mostly short notes or mid-sized articles. No I don't have a masters thesis under my belt. Maybe someday after I feel like my job is done with the Important Bird Areas program and my efforts with the LEPC have made the impact that I am looking and working for. So no, I'm not going to spend anymore time trying to figure out who sent the messages. If you have any respect for me you will deliver a 12 pack of Sierra Nevada Torpedo promptly to my residence, as I am out and could certainly use one!

Good questions, they are worthy of my attention and I think my readers would be interested to know as well. You obviously know my email address so I expect a message in the near future, and will be waiting patiently for my beer. Thank you and have a wonderful night, because I am diving back into my glass of wine, my good book and hopefully later will be spending time with my wife.