Wow! I know, I know it's been a while. A friend gave me some advice a while ago (Doc Revels, she probably doesn't remember telling me this, what with old-age kickin' in!), it was to not let the blog take precedence in my life. Allow it ebb and flow that way I keep myself up to-date with my work. I'm finally getting semi-caught up and am taking the opportunity to fill everybody in on my travels of late. Okay so I'm not really caught up at all, but I'll never get anything posted if I wait any longer!

Last weekend I took the opportunity to head to my favorite portions of Oklahoma, the northwest and panhandle. My goals; fix my personal truck that has been sitting in Laverne for a year, visit a few marshes and look for new ones to add in far western Oklahoma for next year's marshbird season, and visit the Selman Ranch IBA and Cimarron Bluffs WMA to get data on Lesser Prairie Chicken fence marking. Goals in place I moved out and arrived in Laverne Saturday mid-afternoon.

My truck wasn't exactly the first thing on my mind when I got there. Actually it was to go and check a few marshes and playas before the sun went down. I quickly scoured the Laverne lagoons which usually provides something (the best being a Western Grebe a few years back), and then moved on to a slough just east of Laverne. For some reason both locations were pretty slow and uneventful, not one to give up so easily I headed north. Precisely seven miles north to a small pond (the same pond that I found American Avocets nesting at this year...can you say new county record!). This little hot spot gave me plenty to look at, including Wilson's Phalaropes, Black Tern, numerous species of duck, both species of Yellowlegs, some Least and Semi-palmated Sandpipers and a few other odds and ends, much better than the last two stops. Satisfied I headed back to Laverne where I dined at the local pub ("The Rusty Bucket") and then found myself slipping into my sleeping bag at the Prairie Chicken station for some much needed rest!

The morning came around and I ignored it for a short time, and then got busy getting my truck running. It was actually much better off than I had figured. A tank of new gas, some gasoline additive, air in the tires, and a quick jump and the old beast was running again. Not bad considering it hadn't been started in at least a year! Well it was almost a winning situation, I had forgotten to get my tags renewed, so a little bummed I moved on, with nothing but birds and marshes on my mind. Onward and West to the panhandle I traveled.

I spent a great deal of time checking possible marsh locations on the map, mostly in Texas and Cimarron Counties, I have a pretty good handle on the spots in Beaver County. Fortunately many of the playas are full at the moment so of course I couldn't pass those by. I still have yet to find a rail in a playa or bittern for that matter......it would probably make a pretty good study for some Master's student though. Even the very large playas were full. I got fooled into watching a Stilt Sandpiper for a while, thinking for a moment that it could have been a Curlew Sandpiper but good light finally put that quest to rest. Probably my best playa bird were two dowitchers, one a good looking Short-billed still in breeding plumage, very worn, but the golden tones along the scapulars and wings were a sure thing, the second bird never moved and had it's head resting along it's back so I never felt good about a positive on it.

White-faced Ibis were abundant my total for Texas Co. was 13, Cimarron held approximately 27+ that I know of and judging by the amount of water there were probably many more scattered throughout the county. I spent the evening in Kenton after I had received a phone call from Berlin Heck telling me about a Calliope, and Rufous Hummingbirds at a feeder, both good birds for the state. I stayed at the hitching post, which gave me a good opportunity to follow a semi-dry stream bed for a couple of miles. There were plenty of cattails but I'm not sure that it was dense enough cover. Birds were slow around the mesa and my efforts to find really suitable habitat around northern Cimarron county fizzled out, which means I probably won't survey there next year. 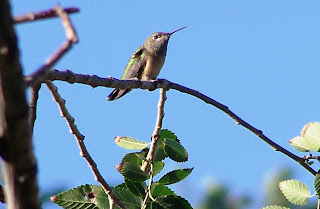 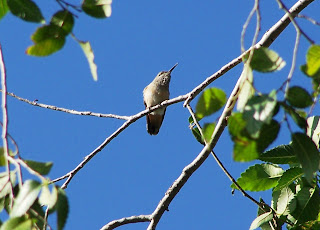 Monday morning after a nice breakfast I started my way back to Lawton but not before I got a call from Steve Metz, Kim Wade, and Dan Robinson who were checking playas east of Boise City, I joined them for a couple visits and picked up my lifer Western Wood-Pewee at a small abandoned farmstead turned fallout zone. After that I put my foot down on the gas, arrived at the Selman Ranch three hours later, got my fence marking data, checked out the new Cimarron Bluffs WMA for a short while and then got back to Lawton at 1am. Just in time to get enough sleep for Chemistry class at 8 am! 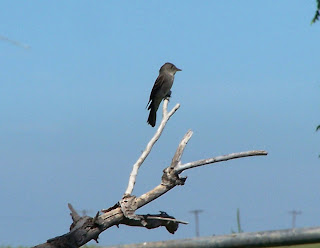 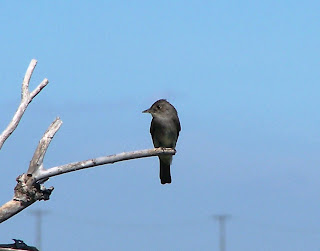 Old Age?!! What? You whipper-snapper you... Nice blog, glad you took my advice. And, I have to admit that I don't remember saying that... :-)